What is the GOLF RULE when you DEFLECT YOUR OWN GOLF SHOT?!

You might be quite surprised to learn about this golf rule. 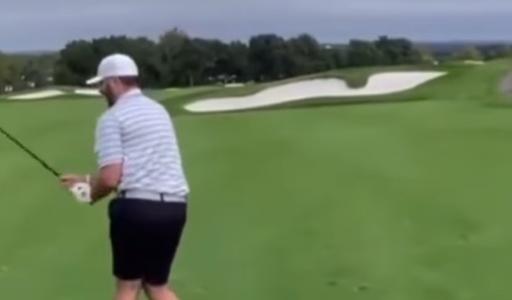 A video of a golfer deflecting his own golf ball has gone viral this week, and the rule might actually quite surprise you.

In the video below, posted by our friends over at Golf Rules Questions on Instagram, the player in question steps in to hit a 3-wood from off the fairway but ends up topping the ball and then deflecting his ball forwards on the follow through.

So what happens in this instance, you ask?

According to GRQ, "there is NO PENALTY for accidentally deflecting your golf ball, and you now play it from where it lies under Rule 11.1."

WATCH THE VIDEO BELOW AND SCROLL DOWN FOR THE OFFICIAL DEFINITION OF RULE 11.1

a) No Penalty to Any Player

If a player’s ball in motion accidentally hits any person or outside influence:

- There is no penalty to any player.

- This is true even if the ball hits the player, the opponent or any other player or any of their caddies or equipment.

b) Ball Must Be Played as It Lies

If a player’s ball in motion accidentally hits any person or outside influence, the ball must be played as it lies, except in two situations:

Exception 1 – When Ball Played from Anywhere Except Putting Green Comes to Rest on Any Person, Animal or Moving Outside Influence: The player must not play the ball as it lies. Instead, the player must take relief.

Exception 2 – When Ball Played from Putting Green Accidentally Hits Any Person, Animal or Movable Obstruction (Including Another Ball in Motion) on Putting Green: The stroke does not count and the original ball or another ball must be replaced on its original spot (which if not known must be estimated) (see Rule 14.2), except in these two cases:

[Model Local Rule available: Local Rule D-7 Limiting When Stroke Made From Putting Green Must Be Replayed Under Exception 2 to Rule 11.1b

NEXT PAGE: TIGER WOODS HAS A TIMEFRAME FOR PGA TOUR RETURN