Angela Akins and Sergio Garcia are happily married and their relationship was personified when the Spaniard won The Masters in 2017. 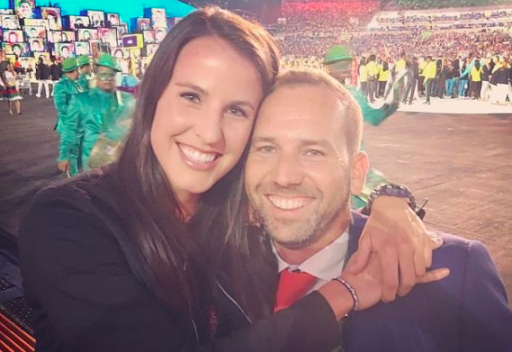 Sergio Garcia has had a long and successful career on the PGA Tour and the European Tour, but the best moment of his career came at The Masters in 2017.

When the Spaniard beat Justin Rose in a playoff at Augusta National, he celebrated with his wife Angela Akins after his round in what was a fantastic moment for the happy couple.

It is no secret that Akins is also a handy golfer herself with a handicap of 3. She played in the golf team when she went to the University of Texas.

The American has also presented and reported for the Golf Channel and it was while working in this role when she met the World No. 48.

Her experience and expertise she has gained in golf have been beneficial to her husband and this comes as no surprise when you consider the athleticism of the rest of her family.

Akins' dad, Marty, is a former All-American quarterback for Texas and her grandfather Ray is also a Texas High-school football coach.

Garcia's wife is from an extremely sporty family as her cousin is also New Orleans Saints quarterback Drew Brees, so she was always going to grow up to be a talented sportswoman herself.

The couple were engaged in 2017 and three months later, the Spaniard picked up his first major title at The Masters. The couple then married in July.

They have two children together. Their daughter Azalea was born in March 2018 and their son Enzo was born in April 2020.