Why did this golfer hit this EXTREMELY DANGEROUS shot?

A very dangerous shot was hit by a golfer in a room with a simulator screen, but why did the golfer hit it with someone standing directly in front of them? 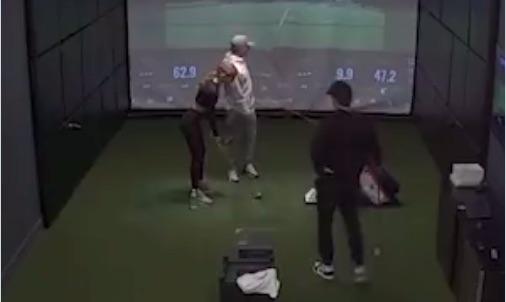 Although golf is one of the most popular and most watched sports on the planet, it can also be very dangerous and accidents can frequently happen.

This is why we are all encouraged to shout 'FORE' on the golf course and this is why PGA Tour players are criticised for not shouting it when they should.

Bryson DeChambeau is one player to have been criticised in the past for not shouting 'FORE', an accusation that the former US Open champion has disputed.

GolfMagic is asking our readers to send in their funniest and craziest videos. Send them to us for a chance to feature on our social media channels.

However, some accidents are caused by pure stupidity and as you can see in the footage below, this appears to be the case with one golfer in a golf simulator.

Related: adidas Golf have some fantastic, fresh new looks in 2022!

There are three golfers in the video and it looked as though the woman holding the golf club might be having a lesson or receiving guidance.

But as the two people appear to be speaking, the woman pulls her club back and swings forwards while the man in the white jacket is stood directly in front of her.

Maybe she didn't realise he was standing there, that would be one explanation. But it certainly makes for uncomfortable viewing as the clubhead seemed to collide with the man's knee.

The woman was extremely apologetic as her friend laid on the floor. "You got me," he said. It sounded as though he saw the funny side of it and luckily he wasn't hurt.

The sound of the connection wasn't pretty either but luckily, there was no injury incurred by the sounds of it. Is he the luckiest man on earth?

Next Page: Will Phil Mickelson consider retirement if Saudi Golf League falls through?