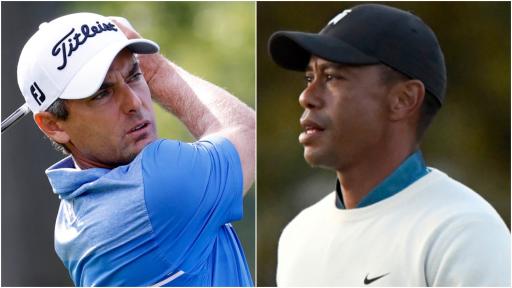 An article in The Undefeated this month has revealed the shocking story Charles Howell III once told about Tiger Woods during last year's US Open, referring back to the night in November 2009 when Woods hit a fire hydrant with his car.

Michael Williams - who wrote the article about Howell III which you can read here - told how he had been invited to a post-round interview at Pebble Beach where Golf Channel's Todd Lewis was sat speaking to Howell III and Patrick Cantlay.

Lewis then described a story that Howell III had been sharing with him, so he set the scene for the 75 journalists and press watching on in the media tent.

"You all remember the night Tiger Woods hit the fire hydrant with his car, right?" said Lewis, to the shock and confusion of the rest of the golfing media.

"Now just to set the scene, there were reporters crews, camera crews, outside the gates of Isleworth from all over the world. I mean, it must’ve been 150 to 200 people there. There were helicopters flying above, trying to get pictures of Tiger’s house, the hydrant, Tiger, whomever. And looking for [his then-wife] Elin.

"Well, Charles decided he’d have some fun with all of that. Charles, pick up the story from there."

Howell III then took to the mic to explain how he thought it would be funny to punk the media who had been looking for Woods.

"So, a friend of mine in the community drives a black Escalade, very similar to Tiger’s," said Howell III.

"Now, this idea should have ended there because [Woods] had wrapped his Escalade around a fire hydrant and wasn't driving it.

"But we took the black Escalade and a friend of ours, who happened to be a blond female. So, we put her in the front seat, OK?”

"And then I took a lot of shoe polish and magic marker and whatnot, and I made myself look like Tiger.

"I put on a black Nike hat with a black Nike swoosh and we drove out the front gate really slow and they thought they found [Tiger and Elin].

"We saw how far around Orlando we could drive these people... we drove to Disney, and, basically, they were following us.

"Literally, we drove through Disney, we drove to Universal Studios and we just kept driving. As far as we could do that. They thought they had found Tiger."

Golf journalist Williams was initially outraged by Howell's blackface comment, but has since received an apology from the three-time PGA Tour winner who now admits the comments have changed him for the better.

"Michael, I’m sorry that this all happened," said Howell III. "But in a way, I’m glad because I’m a better person because it happened, and I got to meet you because it happened. I can tell you that you’re going to have a friend for life because of what this is."