It certainly looks like the Ryder Cup could potentially be heading to the North of England. 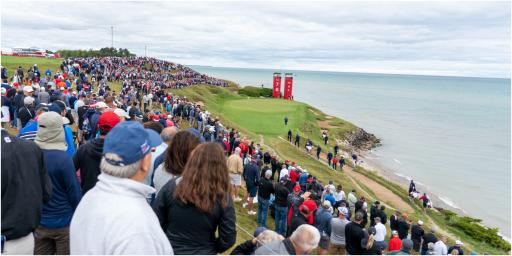 The Miracle at Medinah. The War on the Shore. The Battle at...Bolton?

This could one day be the headline as reportedly the North of England wants to host the Ryder Cup in the future.

In April the three UK venues who will bid to host the tournament in 2031 and 2035 will be announced.

It is widely expected that the Belfry, in Warwickshire and the London Club are understood to be in the frame to host the famous tournament.

RUMOUR: IS THE 2031 RYDER CUP HEADING TO THE LONDON CLUB? A SOURCE CLOSE TO GOLFMAGIC SAYS THERE IS EVERY CHANCE!

Sportsmail have reported that Peel L&P, a Manchester-based development giant are ready to spend hundreds of millions of pounds transforming an 800-acre, historic estate on Bolton's rural border with Wigan.

The development giant are said to have already drafted in "renowned designer" Ross McMurray to draw up plans for an 18-hole championship course along with a hotel and cabins for players, just like at Augusta National.

Planning permission has been granted but there has been some opposition by some locals which will be placed before the town hall early next year.

The cost to build the course is estimated in the region of £200 million.

The most points won by a World Number One at the Ryder Cup (3.5) #FiestaNacionalDeEspaña pic.twitter.com/ojx1GVj97w

The Government has given the green light.

Part of the proposals also include 1,000 new houses.

Rick Shiels, of YouTube fame, who grew up not far from where the redevelopment could take place, has given his backing.

He told Sportsmail: "The North West is crying out for a quality course away from the coast.

"This is a place that doesn't get used and to be able to host one of the world's biggest sporting events would be incredible."

He added: "‘When you have the opportunity to design a Ryder Cup course bespoke you can really go to town and make it a spectacle, and Ross has done that.

"You can think about where the dramatic holes are going to be, where the excitement is going to end and make sure those places are surrounded by amphitheatres. You want the fans at the key moments."

NEXT PAGE: THE NEWS THAT WILL UPSET PHIL MICKELSON