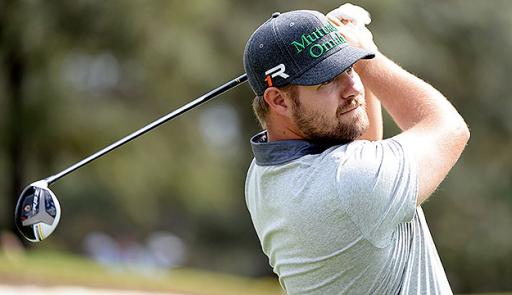 TOUTED as the next big thing from America when winning amateur titles galore in 2004, including the US Amateur, Ryan Moore now finally appears to be reaching his full potential.

Moore, who clinched his third PGA Tour title of his career at the CIMB Classic last night, is also refreshing in the sense he has a homemade golf swing.

According to his father, he’s ‘an old-fashioned trial-and-error guy’, while Joe Beach - the only swing coach he’s ever had - once said: ‘Keep all the know-it-alls away from your kid, all the range rats, all the gurus, because that’s the best golf swing I’ve ever seen; he’s like a well-oiled machine that coils and uncoils and just rips it.’

With that in mind, let’s break down one of the hottest swings on the PGA Tour right now…

As you can see on this short par-3, Moore takes a leaf out of Lee Trevino’s book by setting his feet left of his target line (pin is on the rim of his cap). This helps him release his hips with plenty of speed and explode through the ball. He also has very low hands at address.

Going back, Moore has an incredibly steep shaft plane outside of perpendicular to the ground.

As he goes back to the top, he has an almighty shoulder turn and flattens the shaft and then drops it to the inside. Into the downswing and he re-routes the club with the shaft pointing to the target line.

It might not be as pronounced as Jim Furyk’s swing loop, but there’s a distinct point at the top of Moore’s backswing where after taking the club back vertically, he drops it down in the slot for a downswing that’s much flatter.

Moore flattens his swing plane almost 40-degrees from backswing to downswing and this allows him to really swing out to the target. As you can see, he also has a very quiet lower body and keeps his head down through contact.