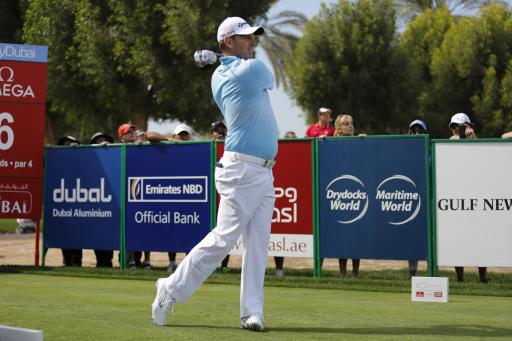 STEPHEN GALLACHER became the first player to defend the Dubai Desert Classic last week when he held off a talented field to win by one shot.

The 39-year-old struggled on the front–nine of his final round but regrouped on the back-nine to record his third win on the European Tour.

“I never do anything easy I'm afraid,” said the TaylorMade staff player who moves into the top 40 of the world rankings for the first time in his career.

“What a day – my emotions are gone.

“I never really played the front nine that well all week. I don't know, it was a carbon copy of yesterday apart from I holed a couple of putts for par and got a bit lucky yesterday but today I was in bushes and trees and stuff.

“I just kept saying to myself, ‘stay patient’. I played the back nine well and no one was really running away with it at the time.

“To win it on the 25th anniversary, it was a good field with all the champions playing, makes it even more special.”

IN THE BAG: STEPHEN GALLACHER

His backswing is relatively classic and he gets set nicely at the top albeit with a slightly closed club face.

He has a solid rotation and his lines are good allowing him to unleash on the way down.

His downswing has a low plane angle which forces his left elbow out which causes his draw. His approach to the ball is from the inside but he maintains flex in his right arm and extends his right wrist which prevents the clubface from closing. After he strikes the ball, he extends quickly.

Not a classic swing but one that works for Stephen.