Want to teach your kids how to play without expensive coaching? Then check out our top tips 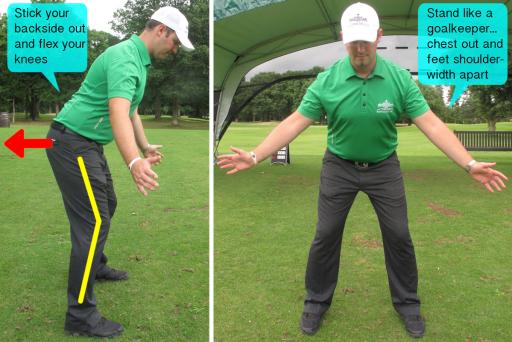 Once the club's in the hand then at set up there's only a few essentials that are required to get the kid swinging consistently.

In the photograph above, James is thinking triangles with his arms and chest, this is the basic set up position for any golf shot. It's a way to reduce the bending of the elbows during a swing and generally keeps it more consistent.

Also, having the ball in the middle of the stance is the least complicated way to teach kids set up, once they start using the fairway woods and drivers then ball position can then be taught.

One of the key ways to a consistent swing is having a straight left arm. In the top right-hand photograph, James is swinging the club with one hand, while keeping his arm straight and having no more than a three-quarter swing.

This drill is great as long as the junior is strong enough to hold the particular club one handed and it doesn't put strain on them.

Next up, hip rotation...