Can't get rid of that frustrating push? Then check out our simple fixes for a better ball flight 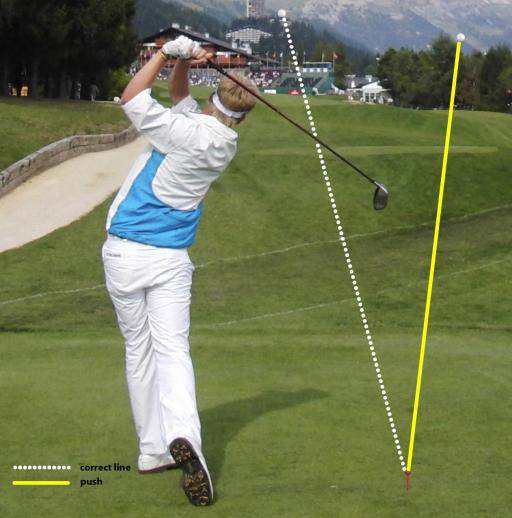 This is the third article in our ten of the best golf swing tips for beginners series.

For a right-hander the push is a shot that starts right and stays right (Fig.1).

Unlike the slice or hook shot, hitting a push doesn't necessarily mean you're striking the ball badly, more often than not it's down to poor set up and alignment, so here are my five quick cures to eradicate the push...

Probably the most important aspect of set up is how far back or forward the ball is in your stance. To prevent a push shot with the driver the ball needs to be further forward, which is where the clubface will be square to the target at the top of the swing arc. The shorter the iron, the further back your ball will be in your stance.

Golfers who are prone to a push generally have their feet further apart than they should be especially when hitting iron shots. This will prevent your weight transfer on to your left and so will cause a block shot right. So for each club have them roughly shoulder width apart, no more than that for iron shots in particular.

3. Make sure your body is aiming straight

It's a basic one but some golfers have a tendency to aim right (Fig.2), possibly to allow for a natural draw but this could be forcing you into a bad habit of pushing it. So get your playing partner to square up your shoulders and feet (Fig.3).

4. Weight on toes not heels

Whether it's in football, rugby, or golf, sitting back on your heels (Fig.2) is never going to allow you full body movement. Being on the balls of your feet at least will give you more of a back arch and looser shoulders (Fig.3), stopping you reaching for the ball and in-turn pushing it.

A good swing will have a lot of hip movement. As golf legend Tom Watson suggests, you should imagine yourself rolling in a barrel during the backswing, giving you a cleaner ball strike and lessen the chance of a push shot.

Want any more swing tips and cures? Then check out our instructional articles on...