Something for the Weekend: Control the matchplay tempo, says Paul Azinger 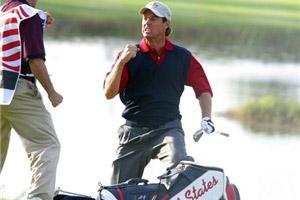 In recent weeks we've urged you to go and try some matchplay golf as well as some tips from Hal Sutton on applying a strategy for your attack. Davis Love has also offered some advice on how to handle the pressure. This week, we stick with matchplay and another former Ryder Cup skipper...

Control the tempo in your match

Controlling tempo is another way to apply pressure to your opponent. If they are hyper and fidgety and like to play quickly, take the opposite approach. Play at a moderate speed, especially if you make a mistake, like fluffing a chip when your opponent is on the green.

Take your time. Put the club back in the bag and re-group. It allows you to simmer down and it gives your opponent time - maybe too much time - to think about their putt.

Controlling tempo isn't always easy. We all know golfers who can't stand still and get impatient, but be careful not to unduly delay the game.

Remember, too, you can control your opponent's putting. Concede short putts early but not late in the match. Don't give your opponent the opportunity to practice any shot that might help them later on. It's an old golf ruse in matchplay that often works. If your opponent isn't used to putting short ones, it will be that much harder for them when it comes to crunch time.

Paul Azinger is one of the shrewdest matchplay brains in golf and used all of his skill to be successful as a player and as a captain.

“If my partner is six feet from the hole and I'm ten feet away, I like to see my partner putt first. He'll really bear down and try to make it, because you haven't made the birdie just yet, but on the other hand he'll feel a little more relaxed knowing you're there with a decent chance of canning your ten-footer in case he misses.

“Chip Beck and I used this strategy against Nick Faldo and Ian Woosnam at The Belfry in 1989 and, man, did it work. We were 11-under for 17 holes and could have been lower. We closed them out 2&1.”

Head to our Something for the Weekend index. Remember to let us know how you get on and share your own tips with us in the forum and on our Facebook page. You can also tweet us @Golfmagic.