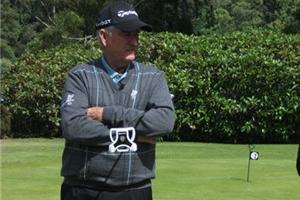 Aged 70 next November, Dave Stockton still rates himself not just a good putter but a 'great putter'. So whom better to approach for a putting lesson than this no nonsense former Ryder Cup captain and multi major champion on both the US regular and seniors Tours?

He'd already torn to shreds the grip, stance and pre-shot routine of a fellow 12-handicap scribe so it was with some trepidation I offered myself to potential slaughter under his expert guidance.

Eyes over the ball

Once he'd shown me how far I was standing from the ball by dropping another ball from my nose and watching it land several inches behind and inside the ideal position just off my left toe, it was clear that having your eyes over the ball at address is non-negotiable.

Neither is a reverse over lap grip that allows the hands to work together to send the ball on the correct path.

"Place the right hand on the putter first then add the left hand so the index finger wraps over the little finger of the right hand," he told me in a firm Californian drawl so familiar during that epic Ryder Cup 'War on the Shore' at Kiawah Island in 1991.

For someone who has tried almost every kind of grip from 'two-fisted' to 'left hand low' to 'claw', it felt uncomfortable but Stockton assured me, even for someone like me who is naturally left-handed but plays the game as an orthodox right-hander, his way would serve me best.

I could feel the strain between my shoulder blades as I did as I was told, moved in close and took up my new stance and grip.

"Most of putting is what you see with your eyes and it's not about 'trying' to do this or do that. I don't use that word when I'm coaching, " said Stockton, whose pupils include Phil Mickelson and Paula Creamer.

"It all about feel and stroking the ball. I don't use lines on the ball, why would I? Draw a line on it and sometimes you'll look at it and it won't look right.

"If there's an obvious borrow to a putt, always look at the putt from the low side then go with your natural instincts, " Stockton told me. "Keep the putt on the high (professional side) because that's where the entrance to the hole is as the putt is breaking."

He also revealed that he only looks at the line of a putt (on an extension of that line) if he can't decide which way it's going to break. He also divides every putt into thirds.

"I'm more interested in the last third when the ball goes slow," he says.

Stockton revealed that he has a very distinctive routine when he putts.

"When I walk into the putt, I put my right foot in first and put the putter down in front of the ball. Then I add my left foot so I'm slightly open to the target and I start looking at the hole.

"I'm getting the feel and I line myself up with my eyes," he says.

So why, I asked, does he place the putter in front of the ball first?

"By the time I look up, the ball's in the hole. It's all about rhythm and what you visually see, then making the back of left hand go over that imaginary spot just in front of the ball on the line you've chosen.

"Just pick the spot on the ground and roll the ball over it. The key to putting is not being perfect. It's about rolling the ball and letting it go."

FOOTNOTE: Dave Stockton has played a key role in the development of TaylorMade's latest line of white Ghost putters which are fast-emerging as the most popular on Tour. The clubs will be available for club golfers in June.