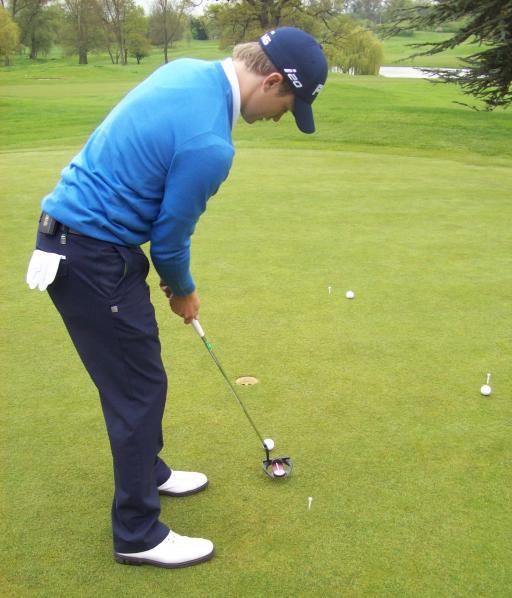 In the final part of Tom Lewis’ putting clinic, the English sensation discusses his favourite holing out drill, alignment on long putts and his typical routine. Over to you, Tom.

Holing out is something you obviously need to do to make a score. I typically place a few tee pegs in a four foot radius around the hole in a circle. You may have seen Phil Mickelson do something similar in the past.

These are the putts you should hole every time. Line it up, take a look, walk in slow, then putt. Move onto the next. Once in a routine, I might want to change the pace of the putt - drop it in the front of the hole, , developing a feel of how much less I can hit it for it to fall into the cup. You may also get a putt on the course where you want to take the break out, so also practice hitting it in firmer all the time gaining a feel of the lines.

If you’re practising hitting the ball in dead weight all the time or if you’re used to smashing them in, and then all of a sudden when you have a downhill or uphill putt, for instance, you will be uncertain and could struggle.

In terms of alignment on the greens, there are two ways of reading a long putt. If my caddie says ‘it’s right edge’, I’m mentally thinking outside the right rather than thinking about holing it. All you’re then thinking about is right edge.

Instead of that, I would much rather look at where I want the ball to finish. Where do I want the ball to travel in order to drop into the hole? I will find the apex, placing a tee peg down approximately three feet from the hole and get a greater sensation of pace.

I will then line up with the low and high point knowing that if the ball rolls over that tee peg at the right pace, it will go in. When I’m walking back to the low point, I’ll be thinking where’s my mid-point, then my new hole is a tee at that point.

Breaking it up makes it much easier to find the line on a long putt. If I say right lip, I would probably miss it right lip. A 30-foot putt, for example, is much easier if putting to a point closer to you, rather than aiming on the right lip some 30-feet away as you don’t know what’s going to happen from there to that point.

My routine starts with marking the ball. I then stand four yards behind the ball before walking to the lowest point then up to the highest point, five yards to the side.

I will then look behind the hole from four yards and think ‘Yeah, that line looks right,’ before moving back to the low point then back to the ball, lining up with the black line on my ball to my target. Am I happy? Yes. Step in slowly, visualise the ball falling into the cup. Look down, take a practice stroke. Look at the hole, practice stroke. One more look, hole it.

Once you’ve looked at the putt more than twice, the more your mind starts to plays tricks. Get in a routine where you stick to either one or two looks.

If you watch Brandt Snedeker putt, you’ll notice he looks at the hole and just as his eyes get back to the ball, the putter’s gone. He just does not miss, I don’t know how he does it.

Some people take far too long. They’re thinking ‘don’t three putt, you haven’t got the line have you, I better just hit it.’ You don’t want that. You just want to be positive and produce a smooth, rhythmical stroke.

Thanks to Golfmagic for letting me share these clinics, and thanks to you for reading. I hope I’ve helped!