Xander Schauffele on US Ryder Cup chances: I'm not good with politics

EXCLUSIVE: Schauffele talks to GolfMagic about a potential Ryder Cup debut and an admiration for adidas Golf. 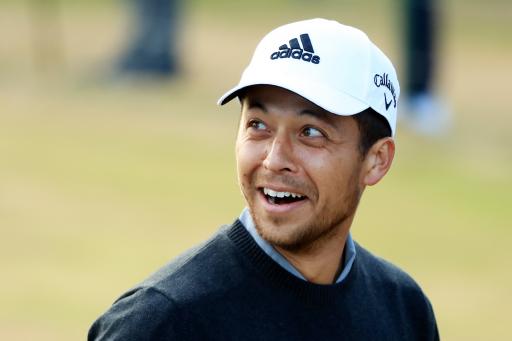 Xander Schauffele has revealed to GolfMagic.com that he's unsure he'll receive one of Jim Furyk's four wildcard picks in the United States Ryder Cup side due to "not being good with politics."

Despite Schauffele's healthy 18th position in the world rankings, the two-time PGA Tour winner finished four places outside the automatic eight spots for a place in Furyk's side following the conclusion of play at the US PGA Championship on Sunday evening.

With the likes of Phil Mickelson and Tiger Woods waiting in the wings and seemingly guarantees for picks in Furyk's team, Schauffele was understandably coy when we posed the wildcard question to him in an exclusive interview on Monday.

"I really don't know to be honest as there a bunch of guys hovering in that pick area," Schauffele told us when quizzing him on his chances of a pick.

"There's a lot of politics and things of that nature involved, and if I'm honest I'm not very good with doing all that stuff, so I have no idea as to where I stand."

Throw in the likes of an experienced Matt Kuchar (13) and in-form trio Kevin Kisner (14), Tony Finau (15) and Kyle Stanley (16), and it's easy to see why Furyk has perhaps an even bigger headache than European captain Thomas Bjorn when it comes to announcing a quartet of names to board the plane for Paris this September.

But Schauffele can't help but look ahead and contemplate that dream debut at Le Golf National.

"It really would be a dream come true," said Schauffele.

"It was one of my goals at the start of the year to play my way into the team automatically, but if I can make a big case over the next couple of weeks in the FedEx Cup Playoffs then who knows what that could lead to.

"I've tried to not think much about it in recent months but it's definitely at the front of my mind now. It would be such an honour to represent my country."

Schauffele's rise up the golfing ranks has been nothing short of monumental, especially when you consider he only turned professional in 2015.

Two years later, the man from San Diego notched two PGA Tour wins in the space of two and half months with victories at the Greenbrier Classic and Tour Championship, the latter of which saw him hold off eventual FedEx Cup champion Justin Thomas down the stretch.

The wins may have dried up this season but Schauffele has still performed admirably on the big stage with a tie for sixth at the US Open and ties for second at both The Players Championship and Open Championship.

"That was pretty neat," said Schauffele, on being in the mix for the Claret Jug at Carnoustie in July only to finish two strokes shy of Open champion Francesco Molinari in a tie for second.

"It was an incredible experience to be in the hunt for The Open but hats off to Molinari who took that one home from everyone else.

"It was nice to be in with a shout on the back nine at least. It's the one I really wanted to win but to give myself an opportunity was all I could do. Hopefully I'll get another chance soon and I'll be able to close it out."

Schauffele somewhat turned his nose away at his tie for 35th at the US PGA Championship last week, but revealed he is taking the positives away from Bellerive as he bids to end his season in style.

"I wasn't particularly happy with my showing last week but it was an improvement on my WGC performance (68th) the week before," he said.

"The game is moving back in the right direction again. It's coming along nicely."

On the subject of the US PGA, Schauffele couldn't help but tip his cap to Brooks Koepka, who landed his third major title in the last 14 months with a two-stroke victory over Tiger Woods.

"Brooks was just so impressive, yet again," he said. "The most surprising thing is that he's now won four times and three of those wins are majors. I don't know what he's doing at the majors but he needs to be doing that all the time.

"He is making winning majors look like a walk in the park and it's very cool to watch."

Another area of the game that Schauffele finds particularly "cool" is his fresh apparel deal with adidas Golf, a partnership he explains to being one of the "easiest decisions" he's ever had to make.

Schauffele loves his new clothing brand so much, he is even hoping he can go on to replicate Sergio Garcia, who will celebrate his 20th year with adidas Golf in 2019.

"adidas has been in my family for a very long time," said Schauffele, who admitted to sporting adidas gear ever since he was a young boy.

"With my father being half French and half German, there was never any other choice as to which clothing brand I was going to wear. It's always been adidas.

"To now be apart of the adidas Golf team, it's just so cool. It was a very easy decision to make last year as it's the sports brand I've known my whole life.

"I'm a big fan of the Tour 360s, Ultimate 365 and the adicross line is very cool. I'm always in adicross gear when I'm travelling to and from tournaments, it's just a great fit for both on and off-course wear."

Xander Schauffele is an adidas Golf ambassador. To view a number of products as worn by the likes of Xander, Sergio Garcia, Tyrrell Hatton and World No.1 Dustin Johnson, please visit the adidas Golf website.