Claude Harmon III on why you should be using Cobra Connect 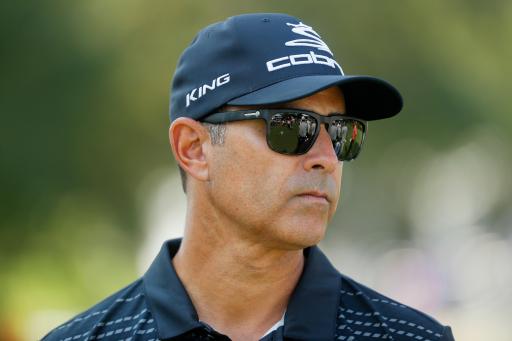 Claude Harmon III – coach to Rickie Fowler, Dustin Johnson and Brooks Koepka among others – is one of the most revered and successful young coaches on the circuit.

An early adopter of technology, Harmon uses systems such as Cobra Connect with the best players on the planet.

We caught up with him at the 2018 Open at Carnoustie to talk about the Cobra Connect system, how data is changing the way golf is taught, and a few things in between.

Cobra Connect embeds a sensor in the butt of Cobra's new F8 clubs, allowing the system to seamlessly track every shot, offering Tour level stats to any player.

What's the difference between modern and traditional coaching styles?

I think the big thing with all the data is what you do with it. The modern coach has more access than they’ve ever had before but you have to do something with that data. I see a lot of young coaches saying ‘here’s your Trackman data, here’s your 3D data, here’s your body track data…here’s what you’re doing’ and the student's like ‘great, now what?’.

You have to do something with all that information, and to me that’s the art of coaching, taking all of this information and using it rather than just having it for the sake of it. The information isn’t any good unless you can help the player improve and get the player to use the data and give it to them in a way they can understand and improve.

How do you incorporate data when teaching your players?

If I give a lesson I’ll video it, get some swings on Trackman, get some on 3D, some on Bodytrack, ideally go out on the golf course and then sit down and say ‘right, this is the game plan’.

Golf is taught backwards. We go to the range first and ask people what they did on the golf course. What I do in my lessons especially with good players, we go to the course first. Watch them play two or three holes, then go to the range and get the information. Then I know what they’re doing out on the course and on the range.

I spend more time with my students whether on Tour or at home on the course.

...are amateurs spending too much time on the range?

Most people spend too much time on the range. The swing changes on the course – that’s one of the good things we can see with Cobra Connect now. It’s the first real diagnostic tool that shows us what they’re doing when the game’s being played. Everything else – Trackman, launch monitors, 3D, force plate – that’s geared towards what’s going on on the driving range. I really don’t care what’s going on on the range…

I think I’ve been more influenced in my teaching by spending so much time with my players at the elite level on Tour, we’re always on the golf course. Off weeks we’ll go home and do stuff on the range, but then we get out on the course as much as possible.

I’m always trying to work out how I can use technology to get as much effect on how they play, I don’t care what it looks like. It doesn’t matter if it looks good on the range it just matters if they can go out and play well and score.

How have you found using Cobra Connect?

I think it’s the first diagnostic tool where the average player can understand what they do when they play. We’re lucky on Tour we have access to Shot Link data and a lot of my guys I work with have access to their own stats people but we’re able to take all that information and see how far they hit an eight iron, their five iron, see how far they hit their driver and in which direction their drives are going. They can see which shape they are hitting, what clubs they are using the most, which they are using the least.

They can take all of this data…we don’t have to guess any more. I’ve used Cobra Connect in my own game now…I don’t waste time working on different things. I know now I’m a better driver of the ball than I thought – I don’t hit it as far as I’d like to, but I’m actually not a bad driver of the golf ball. I don’t miss a lot of fairways, I just don’t hit it very far.

If I was going to analyse my own game I know I hit more fairways than I thought, but I would maybe work on distance. Or…I’d change the tees I play, I wouldn’t go back because I don’t hit it far enough to go back.

When I play at home, sometimes I play with guys on Tour, there’s no way I’m going to play as far back as you guys. I know how far I carry my driver thanks to Cobra Connect, and all my clubs – that’s been huge. For the average golfer that will be really helpful. You look at the average golfer’s scoring average on par threes, it’s way over par – nobody chooses the right club.

With a lot of the juniors I work with now, we’re able to take Cobra Connect and have them go to tournaments and use it in a practice round in tournament mode, and I’ve got juniors that will come back to me…’what did you shoot in the practice round?’ ‘74’ ‘What did you shoot in the tournament?’ ‘86’ and the parent will come back to me and say he needs to hit more golf balls, and I’m like ‘no, he doesn’t need to hit more balls, it’s not the golf swing, it’s not technique or he’d shoot 86 in the practice round and he’s shoot 88 or 90 in the tournament – that kind of discrepancy.

Have you changed your own strategy since using Cobra Connect?

When I play, absolutely. There are a lot of par fives I don’t even mess with going for, on par fours the caddy aspect I look at. The more rounds you put in, the AI starts to make suggestions.

I don’t work with any juniors any more that don’t have it. I say ‘listen, you have to have this in your bag’, otherwise we’re not going to get anywhere.

It allows me to track what they’re doing all over the world. They can’t play without me knowing. As a golf instructor it allows me not to waste that 15 minutes – ‘hey let me know how you’ve been playing’. I already know. And it allows me to zero in before a tournament. I know we’re putting it good, driving it good…irons haven’t been good, we know that an the certain clubs. Then we can look at the golf course we’re going to play.

Has Rickie Fowler been surprised by any of his numbers on Cobra Connect?

It’s nice when Rickie is at home and we can look at his Cobra Connect data when he plays with us because we are able to quantify what he’s doing. If he’s playing good we know he’s playing good because we’ve seen the data. Then when he goes out and he plays good with the data we know what’s happening.