Dustin Johnson has incredibly resigned from the PGA Tour in order to earn a fortune on the LIV Golf Invitational Series. 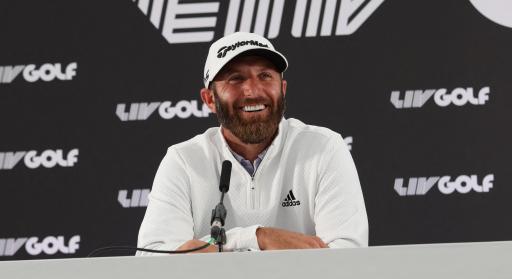 Dustin Johnson will be ineligible to compete at the Ryder Cup after committing himself to LIV Golf and incredibly resigning from the PGA Tour.

Johnson, 37, went unbeaten at the last Ryder Cup but now he has broken away from the PGA Tour to join Greg Norman's new Saudi-backed golf circuit it means, at least right now, that he will be not be able to compete at any future Ryder Cup matches.

"It was," replied Johnson, "but hopefully, obviously, all things are subject to change."

Several months ago he explained he was sticking by the PGA Tour.

But last week Johnson went back on his word and took the money to join LIV Golf, and today, he resigned from the PGA Tour for good.

Related: How much they are all playing for at the LIV Golf Invitational London

"I've done well on the PGA Tour, obviously you all know that," said Johnson.

"I am very thankful for what they have given me too, but this was something different, and I don't want to play golf for the rest of my life and that is something I thought I was probably going to have to do."

Related: Dustin Johnson explains why he has resigned from the PGA Tour and committed himself to LIV Golf

Johnson, who has won 24 times on the PGA Tour and earned just shy of $75 million in prize money, then also spoke about what it means to have Phil Mickelson alongside him at LIV Golf.

Mickelson, who has reportedly been paid $200 million to play in the Saudi golf league, confirmed his participation in the LIV Golf series on Monday evening.

But unlike Johnson, golf's oldest major champion Mickelson still has intentions to play on the PGA Tour.

Mickelson, who has amassed $95 million in PGA Tour earnings, will be making his first competitive start since taking a four-month break from the game following his controversial remarks about Saudi Arabia and the PGA Tour that were made public in February.

"Obviously Phil is a huge icon in the game of golf," said Johnson during his LIV Golf press conference.

"I don't agree with what he said in his interviews, I think he has come out and apologised for that a bunch.

"But Phil is great for LIV Golf, it's great for this new opportunity, he brings a lot of eyes and he's been great for the game of golf. He's been a great ambassador.

"I've known Phil for a long time, have played tons of golf with him and I'm excited and glad he is a part of this and am excited for him to come play with us.

"It only adds more value to us and to what we are trying to do."

Next Page: Phil Mickelson opens up on gambling and is hopeful of a PGA Tour return