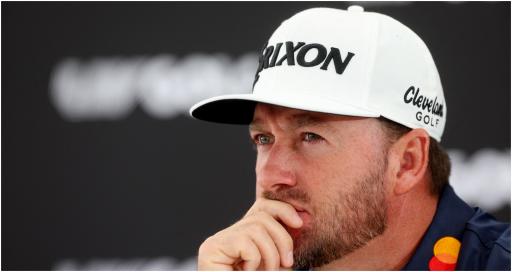 Graeme McDowell says he hopes his decision to take part in the LIV Golf Invitational Series won't affect his Ryder Cup future as he faced a grilling over Saudi Arabia's human rights records.

Related: Dustin Johnson is now ineligible for the Ryder Cup

McDowell, 42, is joined a by a host of Ryder Cup Europe heroes including Ian Poulter, Sergio Garcia and Martin Kaymer participating in the first $25million event of the Greg Norman-led global eight-event series which boasts a total prize purse of $255million.

In a bombshell week in the sport, it has been confirmed that Phil Mickelson will be returning to golf four months after going into self-imposed exile after his true feelings about working with the Saudis were revealed.

Mickelson posted a statement on his social media channels late last night once again apologising for his remarks as he claimed he had a renewed passion for the sport.

Northern Irishman McDowell faced the media alongside Johnson, Louis Oosthuizen and the 15-year-old golf superstar Ratchanon Chantananuwat where they spoke about their decisions to play.

First McDowell was asked how he reconciled his decision to play in this series bearing in mind Saudi Arabia's human rights record.

More: How much they are playing for this week at Centurion Club

"I mean, listen, I mentioned it earlier. This has been incredibly polarizing. I think we all agree up here, take the Khashoggi situation; we all agree that's reprehensible. Nobody is going to argue that fact.

"But we are golfers. Speaking personally, I really feel like golf is a force of good in the world. I just try to be a great role model to kids. I know what the game of golf has taught me. I love using the game of golf as something to kind of help grow around the world. That's pretty much what we've been for the last 20 years, being role models for kids and try to use this game, like I say, as a force of good really.

"We are not politicians. I know you guys hate that expression, but we are really not, unfortunately. We are professional golfers. If Saudi Arabia wanted to use the game of golf as a way for them to get to where they want to be and they have the resources to accelerate that experience, I think we are proud to help them on that journey using the game of golf and the abilities that we have to help grow the sport and take them to where they want to be."

McDowell was then asked to answer how his "journey" with Golf Saudi will help oppressed women and migrant groups who have their rights violated and LGBTQ individuals who are criminalized.

"I wish I had the ability to be able to have that conversation with you. You know, I think as golfers, if we tried to cure geopolitical situations in every country in the world that we play golf in, we wouldn't play a lot of golf. It's a really hard question to answer. You know, we're just here to focus on the golf and kind of what it does globally for the role models that these guys are and that we are, and yeah, that's a really hard question to get into."