Dustin Johnson made $35 million on LIV Golf Tour, but "didn't play his best"

Dustin Johnson was presented as the individual champion and captain of the winning team champions after the LIV Golf finale at Trump National Doral. 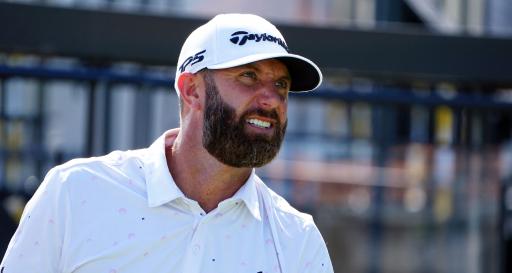 Dustin Johnson said his first season on the LIV Golf Tour "could've been better" despite winning over $35 million and becoming both the individual and team champion in Miami.

The two-time major winner was confirmed as the best individual player on top of the points list at Trump National Doral, before celebrating the 4 Aces victory in the Team Championship.

Johnson, Patrick Reed, Talor Gooch and Pat Perez carded respective scores of 70, 70, 71 and 70 to finish on 7-under-par, one shot ahead of Smash led by Cameron Smith.

With the scores level between 4 Aces and Smash on 6-under, Reed birdied the 2nd hole, his final hole of the round, to take his side to 7-under which proved decisive.

Each player banked $4 million after a dominant season in which they won four consecutive invitationals. Having also won $18 million for coming top of the individual leaderboard, Johnson ended the season with £35,637,766 in earnings.

Branden Grace and Peter Uihlein were presented as the runner-up and the third-place players in the season-long points list. Grace won his first LIV Golf title in Portland, while Uihlein lost in a playoff to Brooks Koepka at the Jeddah Invitational.

"It's pretty good. I feel like it should have been a lot better, but I'm pretty happy with what ended up happening, obviously winning the team championship. That's what we came here for," Johnson said.
"Personally, my season, yeah, you add up the numbers and it was great, but I played good - I didn't play my best, so it always could be better, but that's golf.
"But I'm just happy that the 4 Aces just won this tournament. That's all that matters."