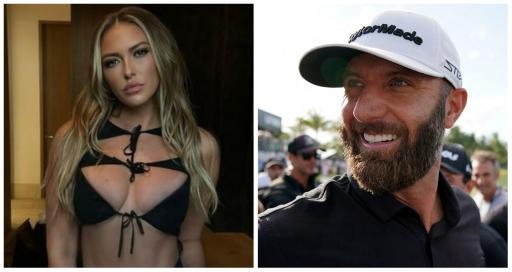 Dustin Johnson's wife Paulina Gretzky took to Instagram to post a saucy picture after running onto the green to congratulate her husband when the 4 Aces GC won LIV Golf's $50m team championship.

Johnson's all-American side of Talor Gooch, Pat Perez and Patrick Reed shared $16m after winning the season-ending tournament at Trump National Doral by one stroke.

Paulina's husband Johnson revealed that he "didn't like" the putt he faced to clinch victory for the side because of just how much money was on the line.

"I do not like stress, so that was a little more stress than I was looking for," he said.
"But with it being the team aspect and I knew the whole team -- like I had to make that for the team to win -- I didn't like it very much. My hands were not real steady."

Still, he managed to roll it in. His team mate Perez told his haters to shut up and Gretzky, who wore a white dress with a matching handbag then planted a kiss on her husband.

Earlier in the week, she posted these pictures too:

Johnson, 37, and Paulina, 33, have two children together. Tatum is seven years old and River is four.

They tied the knot at a lavish wedding in Tennessee earlier in the year having announced their engagement in 2013.

Despite being the daughter of ice hockey legend Wayne Gretzky, Paulina typically likes to keep a low profile and not do too many media interviews.

Asked why it took the couple so long to tie the knot, she said:

"I just do things my own way. I don’t want to listen to how everyone else views things.
"I fell in love with someone so fast and we had the best thing that ever happened to us, happen so quickly. The most important thing was my kids, Dustin and my career. Those things took precedent. Those things had to be established. So, after he won the Masters [in 2020], I said let's do it, this makes sense."

Johnson has had a remarkable season in LIV Golf's first year. The exact figure is not known, but Johnson reportedly signed a multi-year deal with LIV that was north of $100m.

On the course, his tournament winnings reached $35m. No wonder Paulina is smiling.

Of this, Johnson, who previously joked about "hating" his decision to quit the PGA Tour, said:

"It's pretty good. I feel like it should have been a lot better, but I'm pretty happy with what ended up happening, obviously winning the team championship. That's what we came here for.
"Personally, my season, yeah, you add up the numbers and it was great, but I played good -- I didn't play my best, so it always could be better, but that's golf.
"But I'm just happy that the 4 Aces just won this tournament. That's all that matters."