LIV Golf Invitational Series: EVERYTHING you need to know

What is the LIV Golf series all about? Here is everything you need to know about the controversial Saudi-backed series so far in 2022. 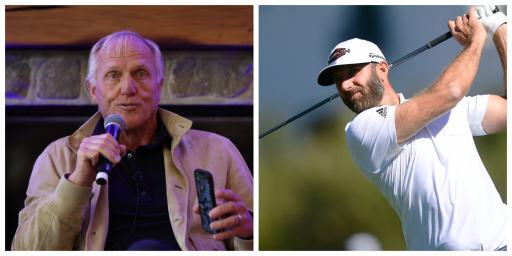 Johnson and Mickelson headlined the field made up of some of golf's biggest names including Lee Westwood, Sergio Garcia, Ian Poulter, Louis Oosthuizen, Charl Schwartzel and Talor Gooch.

A total of 48 players will compete in each event on the LIV Golf Series. The first LIV Golf tournament was held in Hertfordshire, England from June 9-11.

It has since been revealed that all PGA Tour players competing in the LIV Golf Invitational Series, at any stage, will be banned by the PGA Tour.

Since the first event, Patrick Reed, Brooks Koepka, Bryson DeChambeau, Henrik Stenson, Abraham Ancer, Bubba Watson and Matthew Wolff have all made the big switch to the breakaway series.

Who played in the first LIV Golf event in London?

What were the LIV Golf Teams in London?

Who played in the second LIV Golf event in Portland?

What were the LIV Golf Teams in Portland?

Who played in the third LIV Golf event at Bedminster?

What were the LIV Golf Teams in Bedminster?

How does the LIV Golf Invitational Series work?

There will be a seven-event regular season where players compete in 12 teams for both points and prize money. After seven events, an individual champion will be decided based on points throughout the season.

The LIV Golf Invitational Series will feature 12 teams of four players each and as each event will be made up of a different field, each team will be decided by a weekly draft.

Each team will have a LIV appointed captain who will select their three open team positions via a snake draft format.

Over the first two rounds of each event, the best two stroke play scores count and the best three scores will count in rounds three and four. The lowest overall team score after 54 holes wins.

How can you watch the tournament on TV?

If you cannot stomach the £68 daily admission ticket to watch the action up close and personal, you can watch the 54-hole tournament unfold on YouTube.

LIV Golf will also be screeing the action live on their official website at LIVGolf.com.

How much money is up for grabs in the LIV Golf Invitational Series?

As for the weekly individual events, the player who simply has the lowest score after 54 holes wins that event, the same as any stroke play tournament.

Each team will have unique logos, colours and names.

In total, $255 million will be up for grabs across the eight LIV Golf tournaments this season.

At every regular-season event, the prize purse will be $25 million. The winner of each event will win $4 million.

A total of $30 million will be put aside for the top three individual players after the first seven events. This is only available to players who play a minimum of four events.

Each event will be 54 holes, featuring 48 players. To ensure a faster pace of play, there will be shotgun starts and there will be no cuts at any of the events.

Here's how much they all earned at LIV Golf Invitational London...

Here's how much they all earned at LIV Golf Invitational Portland...

Here's how much they all earned at LIV Golf Invitational Bedminster...

What does LIV stand for in LIV Golf?

The name LIV is a reference to the Roman numeral for 54, the score if every hole on a par-72 course were birdied and the number of holes to be played at LIV events

Why is there so much controversy surrounding the LIV Golf Invitational Series?

There is great controversy surrounding the inaugural LIV Golf Invitational Series as it is funded by Saudi Arabian money.

Without getting too much into the politics of things, Saudi Arabia has multiple human rights violations - and that is quite simply the main reason for why there are so many critics of this new golf league funded by Saudi millions.

The greatest example of their shocking human rights record was back in October 2018 when Jamal Khashoggi, a US-basd journalist and critic of Saudi Arabia's government, walked into the Saudi consulate in Istanbul and was murdered.

Significant human rights issues in the country include unlawful killing, executions for nonviolent offenses, forced disappearances, torture and cases of cruel, inhuman, or degrading treatment of prisoners and detainees by government agents. The list goes on.

With that in mind, the LIV Golf Invitational Series is run by LIV Golf Investments, which is backed by Public Investment Fund (PIF). This is essentially the financial arm of the Saudi Arabian government.

Norman previously tried to start a breakaway World Golf Tour back in 1994 and failed - so there is history here, too.

Further controversy has ensued in recent weeks after Norman explained in an interview with Sky Sports Golf that he "does not answer" to Saudi crown prince Mohammed bin Salman.

That surprised many people, especially given the LIV Golf series is funded by the Saudi government.

Norman also declared that the Kingdom should "own up" to the murder of Jamal Khashoggi and "talk about it".

The concept of the LIV Golf Invitational Series from the very start has been to draw the top golfers in the world away from the PGA Tour. There lies more controversy as the PGA Tour tries to keep hold of its global stars.

Do players want to continue to build their legacy on the world's greatest Tour, the PGA Tour, or do they want to take a huge pay packet to ensure they all have a very nice retirement.

In order to attract the best golfers in the world, LIV Golf Investments have reportedly offered either eight or nine-figure sums of money to players just to join.

It is believed Dustin Johnson was offered in the region of $125-150 million to take part in the LIV Golf Invitational Series, and that is before you even take into account the money on the table for playing in each of the tournaments.

Many of the best PGA Tour players such as Tiger Woods and Rory McIlroy have refused to entertain such offers, but as we have now seen, even players like former World No.1 Johnson have eventually caved in, and you have to wonder how many more players of his stature will follow over the coming months.

To counter this from the side of the PGA Tour and DP World Tour, both Tours confirmed they would be denying their players releases to compete on the LIV Golf Invitational Series.

Therefore every player teeing it up in the first LIV Golf Invitational Series event at Centurion is expected to receive a hefty ban from either the PGA Tour or DP World Tour depending on which Tour they hold a card.

Such bans and suspensions have not yet been confirmed but we should learn more about that soon. Players are therefore putting their PGA Tour and DP World Tour careers at risk by committing to LIV Golf.

There is also a grey cloud over what could happen where the Ryder Cup is concerned. It is understood players competing in the LIV Golf tournaments could ultimately sacrifice their chances of ever competing at a future Ryder Cup, but again, this is not confirmed.

As it stands, players competing in the LIV Golf tournaments will still be eligible to compete in the four majors - The Masters, US PGA, US Open and The Open. But again, that could all change very soon too.

Why has there been so much controversy surrounding Phil Mickelson with the LIV Golf Invitational Series?

Phil Mickelson took an indefinite break from the game this season following comments he made to biographer Alan Shipnuck that were made public. Mickelson thought his comments to Shipnuck were "off the record" but Shipnuck strongly denies this.

Shipnuck, who spoke at length to Mickelson back in November 2021 ahead of writing his new book titled 'Phil: The Rip-Roaring (and Unauthorized!) Biography of Golf's Most Colorful Superstar', released controversial comments from Mickelson in February 2022.

Mickelson told Shipnuck how he wanted to take part in the new LIV Golf Invitational Series because he wanted to use Saudi Arabia's interest in signing top stars for its own circuit to leverage the PGA Tour into giving the players more money.

That is all despite the country's histroy of human rights issues.

Mickelson did not hold back in his thoughts.

"They’re scary motherf--kers to get involved with," he told Shipnuck.

"We know they killed [Washington Post reporter and U.S. resident Jamal] Khashoggi and have a horrible record on human rights. They execute people over there for being gay. Knowing all of this, why would I even consider it? Because this is a once-in-a-lifetime opportunity to reshape how the PGA Tour operates.

"They’ve been able to get by with manipulative, coercive, strong-arm tactics because we, the players, had no recourse. As nice a guy as [PGA Tour commissioner Jay Monahan] comes across as, unless you have leverage, he won’t do what’s right.

"And the Saudi money has finally given us that leverage. I’m not sure I even want [the SGL] to succeed, but just the idea of it is allowing us to get things done with the [PGA] Tour."

Mickelson apologised for his comments when they were made public and he explained how he wants time away from the game in order to work on himself and improve as a person.

Fast forward to today, and Mickelson has now confirmed his participation in the LIV Golf event at Centurion Club.

It will mark his first competitive start in four months since taking a break from the game.

Mickelson has reportedly been given $200 million to sign up to LIV Golf.

Lefty lost the majority of his sponsorship deals as a result of his comments about Saudi Arabia and the PGA Tour.

Callaway, his long-time equipment supplier, chose to freeze their partnership.