LIV Golf CEO Greg Norman has been told to stay away from the unofficial PGA Tour event that he founded in 1989. 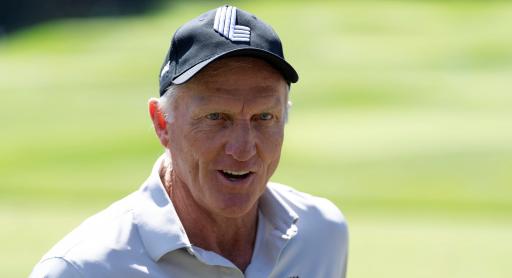 LIV Golf CEO Greg Norman has confirmed he has "been asked not to attend" the QBE Shootout this December, an unofficial tournament on the PGA Tour that he founded in 1989.

The news interestingly comes just 24 hours after GolfMagic published an article posing the question as to why Norman's team event was even still on the PGA Tour schedule given he is now the boss of an opposing LIV Golf Tour bankrolled by Saudi Arabia's Public Investment Fund.

The QBE Shootout is a 54-hole competition (no LIV Golf puns intended) that sees 12 two-player teams competing in Scramble, Greensomes and Better Ball.

While the tournament will still go ahead this year and still remain under Norman's watch, the Australian is going along with a request not to attend his very own designed Tiburon Golf Course in Naples from December 9 to 11.

Norman took to social media on Tuesday evening to express his disappointment at the news:

"Sadly, after 33 consecutive years of playing in and hosting every Shootout tournament - a co-sanctioned PGA Tour event - since I founded it in 1989, this year I have been asked not to attend.

"Why one might ask? Perhaps it is because I am helping to give golf a new heartbeat, creating new value and delivering a new product that is loved by players, fans and broadcasters alike. And in doing so, finally giving players their rights as independent contractors to benefit from their performance and brand. In some people’s mind this is too disruptive and evolution is perceived as a bad thing. I disagree – competition breeds excellence.

"Change is good. Evolution and innovation of the professional golf product has been needed for decades - just ask the next generation of golf fans. Over its lifetime, the @qbeshootout tournament has raised in excess of $15 million for well-deserving charities like @curesearch, who is on an important mission to eradicate childhood cancer. These charities, their missions and the financial benefits they receive from Shootout tournament donations each year is of the utmost importance to me and my family. As such, I have decided not to attend this year’s event so the focus can remain on the missions at hand.

"To the Shootout charities, the City of Naples and to all of the incredible volunteers, corporate sponsors, fans and Shootout staff, I thank you from the bottom of my heart for your continued good work and support. I will miss seeing you all this year but I will certainly be there in spirit."

Wasserman Events operates all of the golf tournaments previously operated by Greg Norman Production Company, which they bought in 2015, and this also includes the QBE Shootout.

Norman's comments about the QBE Shootout come just hours after it emerged that 50 LIV Golf players have sent a signed letter to OWGR chairman Peter Dawson "urging" him to include LIV Golf Tour events with ranking points.

Next Page: Louis Oosthuizen just might have LIV Golf buyer's remorse - "It sucks"