Why is Greg Norman's golf tournament still on the PGA Tour schedule?! 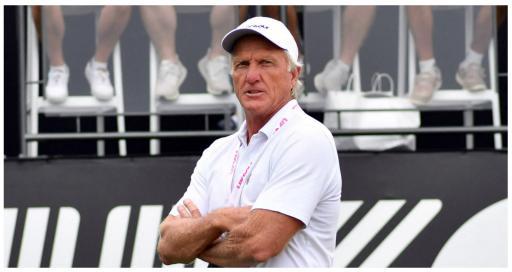 If you thought the huge divide created by LIV Golf had made things a bit awkward on the PGA Tour right now, just wait until Greg Norman's QBE Shootout comes to town this December.

The QBE Shootout has been staged under many different names since its introduction in 1989, most famously the Shark Shootout in 2009 as a result of being hosted by two-time Open champion Norman.

Despite this year becoming CEO of the Saudi-backed LIV Golf Tour, it is understood that Norman remains in his role as host of the QBE Shootout that takes place on the Norman-designed Tiburon Golf Course in Naples from December 9 to 11.

Yes that's right, an unofficial Greg Norman-hosted tournament on a Greg Norman-designed golf course on the PGA Tour in 2022 - see below.

Wasserman Events operates all of the golf tournaments previously operated by Greg Norman Production Company, which they bought in 2015.

This also includes the QBE Shootout.

Norman's photos are still splashed all over the QBE Shootout website ahead of the 2022 tournament and it is understood the Australian is remaining in his role as tournament host.

There is no shotgun start, though.

It remains to be seen what exactly happens in terms of this year's field as the tournament is on the PGA Tour schedule.

However, it is an unofficial end-of-season event on the PGA Tour so perhaps there will be some easing of restrictions where PGA Tour bans for LIV Golf players are concerned.

Perhaps Norman will allow his LIV Golf players Kokrak and Na back in to defend their title, or maybe it will be out of his hands?

Either way, it will be an awkward few days for everyone involved just two weeks before Christmas.

There will no doubt be an update on the QBE Shootout from Norman and the PGA Tour over the coming weeks so let's see what happens.

One particular update that Norman is waiting for surrounds the issue of Official World Golf Ranking points for his LIV Golf tournaments as they are currently being shut out by officials.

According to the Washington Post, Norman could be waiting until 2024 at the earliest until a decision is reached on OWGR points.

Next Page: Dustin Johnson may have just landed himself in hot water with Paulina Gretzky