Greg Norman hits out at Phil Mickelson's controversial comments, citing his words contributed to a number of big PGA Tour names pulling out of his new Saudi-backed breakaway circuit. 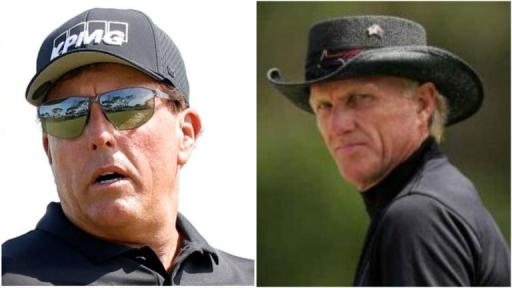 Greg Norman has told ESPN how a number of big PGA Tour stars pulled out of his new LIV Golf Invitational Series as a direct consequence of Phil Mickelson's controversial remarks to Alan Shipnuck earlier this year.

Norman, who admits he was ready to launch his new Saudi-backed breakaway circuit during the week of the Genesis Open in the middle of February, claims 30% of the world's top 50 had already committed to play on his new Tour.

But those plans were scuppered as a result of Mickelson's remarks where he called the Saudi Arabians "scary motherf******".

"They killed [Washington Post reporter and U.S. resident Jamal] Khashoggi and have a horrible record on human rights," Mickelson said in the interview with Shipnuck.

"They execute people over there for being gay. Knowing all of this, why would I even consider it? Because this is a once-in-a-lifetime opportunity to reshape how the PGA Tour operates."

Plans were in a place for a stacked field with 14 events, and Norman was all ready to go live with his new Tour during the week of the Genesis Invitational hosted by Tiger Woods at Riviera from February 17 to 20.

Norman had to go back to the drawing board.

In a recent interview with ESPN, Norman, a two-time major champion and the CEO of LIV Golf Investments, said: "There's no question his comments hurt. It hurt a lot of aspects. It hurt the PGA Tour. It hurt us. It hurt the game of golf. It hurt Phil. So yeah, across all fronts. It wasn't just specifically to us. But it definitely created negative momentum against us."

He added: "Quite honestly, we were ready to launch on the Tuesday or Wednesday of Genesis. We had enough players in our strength of field, or minimal viable product, ready to come on board. And when all of that happened, everybody got the jitters, and the PGA Tour threatened people with lifetime bans and stuff like that."

The LIV Golf Invitational Series will now tee off at Centurion Club in England in early June and there will be eight tournaments in total.

Five of the events will be staged in the United States.

In total, players will be competing for a gigantic $255 million, making it in the richest prize of all time in golf.

The top three players across the seven regular-season events will split a pot of $30 million.

It will all end with a team match-play championship at the end of October, staged at Trump National Doral in Miami, with another $50 million up for grabs in that week alone.

"To this day, we still have players under contract and signed," said Norman. "The ones who wanted to get out because of the pressure of the PGA Tour gave back their money and got out. Guys had money in their pockets."

As for Mickelson, Norman admits he will still be welcome to join his Tour despite everything that has transpired in recent months.

"He's always going to have an open door," Norman said of Mickelson.

I can't read Phil's mind because I haven't spoken with him. From our perspective, I'm always going to be consistent in that I respect Phil.

"I respect what he's done for the game of golf, and he's always going to have an open door to any golf tournament he wants to go play as far as I'm concerned."