Greg Norman says it was "no coincidence" that Phil Mickelson's comments came to light before the announcement of the LIV Golf Invitational Series. 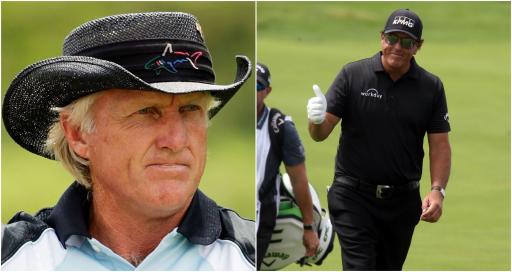 Greg Norman says he is set to announce "marquee names" for the LIV Golf Invitational Series "despite all the white noise" as he accused the journalist who exposed Phil Mickelson as working with the PGA Tour.

According to a report by James Corrigan of The Telegraph, Norman is poised to name some participants ahead of the first event this summer.

The eight event series will begin at London's Centurion Club in June just one week before the U.S. Open.

Norman told the paper: "We've respected the Masters and let it go off, but now our journey is finally coming to fruition - for the players not for me.

He added: "[It is] their rightful place to have what they want.

"That's why they are still very, very, very interested. We have players signed, contrary to the white noise you're hearing out there."

Players will be competing for $255million throughout the series. The first seven regular season events carry prize purses of $25million.

That is comprised of $20million in individual prizes and $5million for the top three teams.

Norman, who has not given the names of those "signed", further told the paper: "The interest level we've had, well, I had had a player who's won a couple of major championships sitting in my very office 48 hours ago."

If this is to be believed, he could be talking about Bubba Watson.

Watson spoke over the weekend about his split with Ted Scott, who was on the bag for Scottie Scheffler as he won The Masters.

The left-hander explained that when they split he wasn't sure how long he had left in the game because of injuries.

Watson also took part in the Saudi International and was one of several players to defend their decision to take part despite the kingdom's human rights abuses.

Along with Watson, Ian Poulter, Lee Westwood and Kevin Na (who has been spotted wearing clothing with Golf Saudi logos) are understood to have been targeted.

Players who take part could face bans from the PGA Tour, but that would likely lead to a battle in the courts over the legality of such action.

The new league was dealt a blow when Phil Mickelson's shocking comments came to light by the biographer Alan Shipnuck.

Mickelson admitted to Shipnuck he was happy to overlook Saudi Arabia's human rights abuses as it was "a once in a lifetime opportunity to re-shape the PGA Tour".

It led to a dramatic fall from grace from Lefty as sponsors paused or ditched their relationships with him. He also missed his first Masters in 28 years and was described by DeChambeau as having "gone dark" by not answering phone calls.

That caused Dustin Johnson, Bryson DeChambeau and several other pros to release statements about their futures.

Norman has previously said he will keep the door open for Mickelson to return.

Of his comments coming to light, he told the paper: "It was a kick in the teeth, there's no question about it.

"It was a gut punch - we were so close. On that Tuesday we had our strength of field ready to go and the PGA Tour heard about this and threw a giant redwood tree in our roadway.

"And they did, there's no question about it. They created a disruption by putting that information out, all those comments about Phil out there."

Norman told the paper he believed the PGA Tour and Shipnuck were working together, describing it as "no coincidence".

"It was calculated," he said. "It's not like my 45 years in the game has left me on the outside. I have some pretty good intel on that, you know, it was calculated in how it came out."

The PGA Tour declined to comment and Shipnuck dismissed this claim, according to the paper.