Phil Mickelson and Dustin Johnson give their verdicts after LIV Golf strikes a 'strategic alliance' with the MENA Tour in order to receive OWGR points. 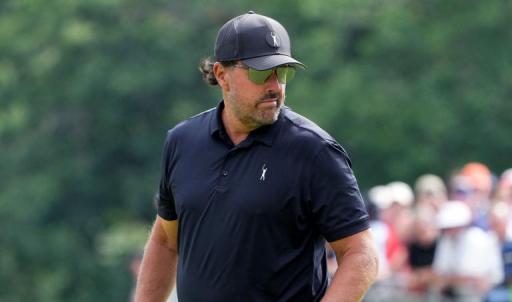 Phil Mickelson believes LIV Golf's decision to strike a 'strategic alliance' with the MENA Tour in order for their tournaments to now receive Official World Golf Ranking (OWGR) points is "good for all parties" moving forwards.

Mickelson was speaking to the media ahead of this week's LIV Golf Bangkok tournament where it is understood the Saudi-backed circuit will hope to obtain valuable OWGR points for the very first time since their inauguration in June.

"I think from a player standpoint, it feels great to have everyone at LIV fighting so hard for the players and their best interests," said Mickelson.

"I think for the World Golf Rankings, this is a great way to keep its credibility, while not bringing in politics into the decision-making process. I think it's good for all parties."

As for exactly when and how many points LIV Golf tournaments will start to accumulate given the depth of their fields each week (48 players) remain unknown.

But Mickelson believes the OWGR will come to the right solution because some of the world's best players including Cameron Smith and Dustin Johnson are always lining up.

"The reason I'm not concerned is that the number of points are based on the quality of the field and not the organization that's running the tournament, and the quality of our field is remarkably strong," said Mickelson.

"I'm sure for the World Golf Rankings to maintain their credibility, they'll continue to award the proper number of points that the tournaments deserve for all Tours."

On the LIV Golf Tour partnering with the Dubai-based developmental MENA Tour, Mickelson said: "Given the many obstacles that we have had to face from those trying to stop it, I think it's a great way to do this in addition to adding in a developmental Tour for the Asian Tour who will be our feeding Tour going forward. So I think it's a win on all parts."

Dustin Johnson believes it's fair that LIV Tour players can now earn official world ranking points but does not expect retrospective points from first five events of the LIV series.pic.twitter.com/gbigMZ2wMK

Johnson also weighed in on the subject.

"I think we deserve them [OWGR points]," said Johnson, who is looking to win his second LIV Golf title this season.

"I think obviously with the quality of players we have out here, the events we're having, we should have them.

"I think it's fair. I think it's very smart and strategic the way they're going about it, but hopefully they make the right decision and give us World Ranking points."

Do LIV Golf events really deserve OWGR points? Share your thoughts and comments over on the GolfMagic social media channels.