Pat Perez's wife Ashley Perez weighs in on her husband's decision to break away from the PGA Tour to join LIV Golf. 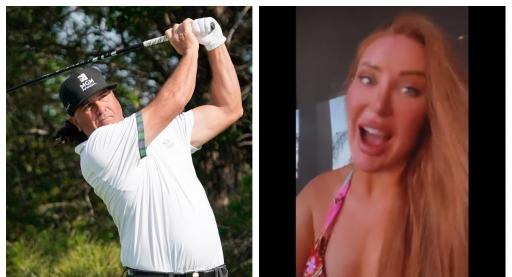 Pat Perez's wife Ashley Perez gave the game away earlier today that her husband was leaving the PGA Tour after many years on the circuit to join LIV Golf - and things have quickly escalated this afternoon judging by her social media.

It would appear Ashley received a number of unwanted messages following her Instagram Story post that informed her followers that he was joining LIV Golf before anything had even been made official by him or the circuit themselves.

Perez has played on the PGA Tour since 2001 and he has amassed just shy of $30 million in career earnings.

The three-time PGA Tour winner will reportedly make $10 million for his participation in the LIV Golf Series, and he is expected to be competing in the next LIV event in Portland at the end of the month.

Ashley, who according to her Instagram bio is an innvoative engineer, designer and artist, says she has blocked close to 300 people from her Instagram today as a result of all the negative comments she has received about Perez joining LIV Golf.

She then released what can only be described as an epic rant about it all.

Enjoy. Please make sure you stay until the very end, as her last line is an absolute cracker.

Pat Perez’s wife weighed in on his decision to leave for the LIV Tour on IG.

Golf is honestly a WWE storyline at this point.

(Please stick around for the end, “this new Tour is going to be ICONIC” will be in a LIV promo by the end of the day) pic.twitter.com/OwyrviFISh

"I feel so done having to get on here and do this video for you guys, but I just wanted to throw something out to the universe. Okay?

"My Instagram platform is not me promoting myself and my body in a sexual way for you guys to go home and enjoy yourself with. Okay?

"Nor is it promoting useless s*** that I don't use trying to sel and promote to you. My Instagram is solely based on my family.

"So if anybody feels the need to say anything, and I mean anything negative about Pat going to the LIV Tour you will be blocked, just like 200, maybe even 300 other people have been already... and you'll never be back in.

"So anyways, that being said I love you all, I cherish you all until you say some bulls*** that I don't like. I don't need it, I won't accept it, I will not allow it in my world, ever.

"So if you feel the need that you need to say something just go ahead and f***ing delete me from your page. I won't miss you.

"But this new Tour is going to be ICONIC! HAAAA!"

Next Page: Dustin Johnson confirms he will only play LIV Golf events and the majors