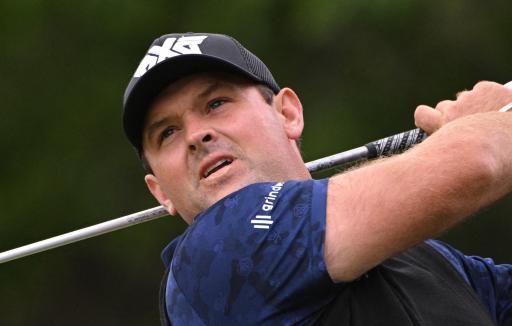 Patrick Reed says he is "super excited" to have officially joined LIV Golf and he has confirmed he will be teeing it up in the next Portland event at the end of the month.

There had been rumours all week that Reed was going to join the controversial new LIV Golf Tour led by Greg Norman and the news was confirmed during the final round of the LIV Golf Invitational London at Centurion Club.

Reed, the 2018 Masters champion, has endured a wretched run of form on the course of late with just one top-10 finish all year.

But the World No.36 has decided to try change his fortunes by following the likes of Dustin Johnson, Bryson DeChambeau, Sergio Garcia and Phil Mickelson and breaking away from the PGA Tour to join the Saudi-funded LIV Golf Invitational Series.

He has not resigned his PGA Tour membership but he will now face a hefty ban from the PGA Tour as a result of playing in the next LIV Golf tournament.

All players competing in LIV Golf events will receive a suspension on the cicuit.

Related: What has happened to Patrick Reed's PXG deal? It would appear it's ended already!

"I am super excited," Reed said during the live broadcast of the final round at Centurion.

"Just the thought of being part of an evolution and change for the better is unbelievable. I have been watching the action all weekend, I love the format, I am super excited and can't wait to be a part of it.

"I think it's unbelievable. It's refreshing to see team golf again, like the good old days of college golf and Ryder Cup and Presidents Cup. You are not just playing for yourself but the team.

"Being able to see more golf and shots in the coverage, shots from everyone and not just featured groups, and just always knowing where you stand, seeing the leaderboard on the side of the screen and everyone being through the same holes.

"I like 54-hole events, it's more of a sprint than a marathon. It brings me back to those Monday qualifying days."

Reed said that he has been in contact with a number of LIV Golf players already so far this week, and he loves what they have had to say about the inaugural event at Centurion Club.

"I've been in contact with a lot of them," said Reed.

"It's awesome to hear their energy and just how excited they are for the event. I have talked to a lot of guys after the first two rounds. They told me not just how well it's run but the turn out of the fans, the excitement on the course and the energy of it all. The energy seems so lively, they are so pumped and ready to go.

"Portland cannot come soon enough. I can't get up there fast enough. The turn out will be amazing, and I can't wait to get back to the grind, especially in this new format. It's going to be an unbelievable experience and I can't wait."

Greg Norman, CEO of LIV Golf Investments, said: "The growing roster of LIV Golf players gets even stronger today with a player of Patrick Reed’s caliber.

"He has a proven track record as one of the most consistent competitors in pro golf and adds yet another big presence at our tournaments.

"He is a major champion who has had a significant impact playing international team competitions, and he’ll bring another impressive dynamic to our team-based format at LIV Golf."