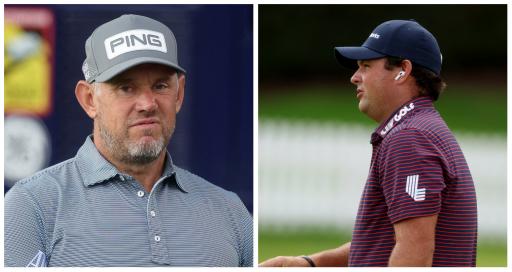 Former World No.1 Lee Westwood and Masters champion Patrick Reed have both opened up on their experiences of playing the DP World Tour's flagship event as LIV Golf players.

Some were predicting that there might be some heated words exchanged between both sides of the divide. We've already heard of temper tantrums on the range. Sergio Garcia, memorably, was alleged to have blown off the handle after news broke he was being fined £100,000 before the BMW International Open in Germany.

Garcia now faces a fine again after he withdrew from the BMW PGA Championship at Wentworth - that was won by Shane Lowry - after the first round. The Irishman later claimed his victory was "one for the good guys" in what was clearly a dig at the LIV players.

Last week at Wentworth, we did see what looked like a frosty exchange between Ian Poulter and Billy Horschel. Poulter later claimed there was nothing in it. This followed Horschel calling out some LIV players by name. He took a pop at Talor Gooch and said he "wasn't fooling anyone" with his appearance.

As for Westwood and Reed, they fared well in Surrey. Reed finished T-5, whereas Westwood was T-13.

Westwood, 49, was recently asked about his experience of playing the BMW PGA Championship as a LIV player.

"The media are stoking it up and doing as much as they can to aid that. I think the general public just want to go out there and see good golf no matter where it's being played or who's playing it," he said.

"You know, the fans are always really good here, but this week, it's been really special."

"Obviously you know, Her Majesty passing away, everybody is a little sombre and downbeat, but they look like they went out there and really enjoyed their golf today, the fans, as we did and tried to give them something to enjoy. It's an entertainment game, isn't it. Show a few birdies."

Westwood was also asked if he had any inkling as to what the result will be of the court battle between the PGA Tour and LIV.

"Do I look like a lawyer?" Westwood told the media.

He continued: "No, and I don't know what everybody is after, either, because there's mixed messages coming from everybody.

Westwood claimed he did not face any animosity last week.

As for Reed, the 32-year-old echoed Westwood's sentiments: "I definitely felt welcome. The guys were very respectful, very nice to me. They were the same as when I come over and play year-in and year-out every time.

"For me as a player and as an honorary lifetime member, I definitely will come back and play. I don't plan on being one-and-done. I always want to play at least the minimum and continue to hold my card. I take pride in that, I take pride in being a worldwide player and coming over and playing on The European Tour. Nothing will change how I feel about coming over to play."

Next page: Patrick Reed hits back at Rory McIlroy