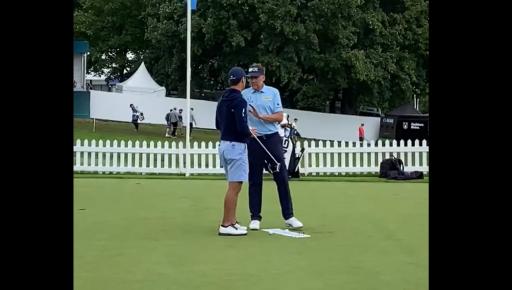 Ian Poulter and Billy Horschel were seen getting into a heated debate on the practice putting green at Wentworth ahead of this week's BMW PGA Championship on Wednesday afternoon.

A video of a dispute between Horschel and Poulter this afternoon was uploaded to Twitter by National Club Golfer's George Cooper.

While it's not 100% certain what the subject of their conversation is about, given what Horschel has been talking about in the media this week we can only suspect it's about the one thing... and that is LIV Golf.

WATCH THE DEBATE BELOW:

I wonder what Billy Horschel and Ian Poulter are talking about here pic.twitter.com/kFThmGCKsR

Horschel accused some LIV Golf players of hypocrisy as they prepare to tee it up at the DP World Tour's flagship event.

Speaking to the media on Tuesday at Wentworth, Horschel said he doesn't believe that the LIV Golf players should be playing at the Rolex Series event this week, especially as some players claimed they wanted to play less golf by joining LIV.

Horschel admitted he and his family weighed up the option of leaving the PGA Tour, but the "cons" on the LIV side were too many.

At the Genesis Scottish Open earlier this summer, the 35-year-old American was very outspoken against the LIV Golf Tour and he believes some players were led astray by their agents and false promises from LIV.

There are 18 players from the Saudi-backed series teeing it up in Surrey this week.

Rory McIlroy said that he would find it hard to stomach seeing so many rebels at a DP World Tour event.

"My stance on this is that when those guys were trying to figure out if they were going to the LIV Tour or stay with the PGA Tour or the DP World Tour, they had to factor in that they knew world ranking points wouldn't come right away or not come at all.

"They had to factor in that they knew they were going to be suspended from the PGA Tour and possibly the DP World Tour, that they may not be in majors. By factoring that in, they factored in what the financial reward needed to be for them to leave.

"I don't fault them for making that decision, but you made the decision that is going to weaken both tours and that's a tough way to go about it. Those guys aren't going to play enough going forwards to help the PGA Tour and especially, the DP World Tour.

"You've never played this tournament, you've never supported the DP World Tour. Why are you here? You're here for one reason only and that's to try and gain world ranking points because you don't have that.

"It's pretty hypocritical to come over here and play outside LIV when your big thing was to spend more time with family and want to play less golf."

Last month, Poulter was raging that he was "being treated differently" whilst on the DP World Tour.