Have PXG and Patrick Reed already parted ways on the PGA Tour? 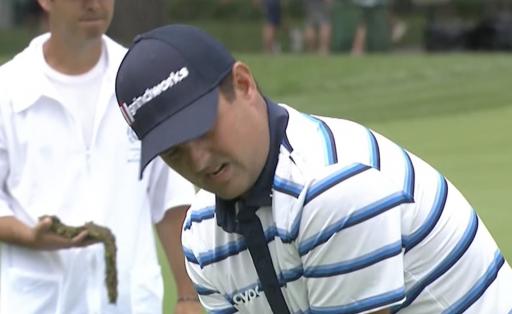 The peculiar story of Patrick Reed's equipment deals surfaced once again during the first round of the Memorial Tournament at Muirfield Village as the former Masters champion was seen wearing a cap without his PXG logo.

Reed had been a free agent in the equipment world up until the start of this year when he signed a deal to become a PXG staff player, or a PXG troop as the brand likes to call it.

But after ditching his PXG driver at last week's Charles Schwab Challenge in favour of a Grindworks driver, Reed was seen playing his first round at Jack Nicklaus' iconic tournament today without the PXG cap he had been wearing the past six months.

Up until the first round of The Memorial, Reed had been wearing a cap with PXG on the front and a Grindworks logo at the side.

Now he is wearing a cap with just Grindworks on the front, and there is no PXG logo to be seen at all.

Also - taking a look on the PXG website under its Tour pros, and Reed has been removed.

So it begs the question, have PXG and Reed decided to call time on their relationship after just six months together?

It would certainly appear that way.

Reed signed a deal with PXG at the start of the year, but now does not have a single PXG club in his bag

Despite joining PXG at the start of the year, the nine-time PGA Tour winner had only favoured one PXG club in his bag and that was the 0811X driver.

Six months on, and the driver has been lifted from his bag.

Reed, who is now using a Grindworks driver, actually picked up his best finish all year on the PGA Tour with a tie for seventh at last week's Charles Schwab Challenge.

Reed is said to have worked with Grindworks for countless hours designing and creating the irons of his choice.

Short equipment deals seem to be the norm for Reed the past 12 months.

Last year ahead of the 2021 Masters at Augusta National, Reed signed an apparel deal with Castore Sportswear.

Two months later, he was back in G/FORE clothing and there was no Castore apparel to be seen on him - READ MORE HERE

GolfMagic reached out to Castore for comment at the time but nobody responded to confirm what exactly had happened.

Next Page: Dustin Johnson made huge Saudi golf U-turn after being offered $150 million