Alan Shipnuck says he was "physically removed" from Phil Mickelson's press conference by security on day one at the LIV Golf Invitational London. 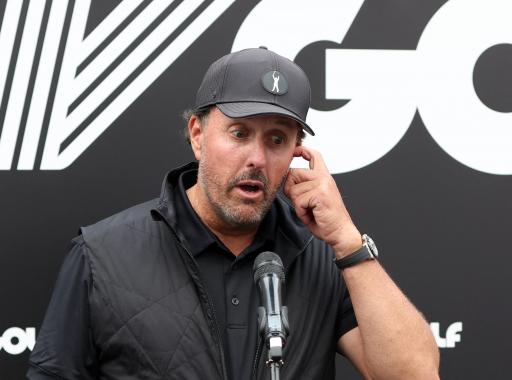 Golf biographer Alan Shipnuck says he was "physically removed" from Phil Mickelson's press conference by security on day one at the LIV Golf Invitational London at Centurion Club.

Shipnuck, who spoke at length to Mickelson back in November 2021 ahead of writing his new book titled 'Phil: The Rip-Roaring (and Unauthorized!) Biography of Golf's Most Colorful Superstar', released controversial comments from Mickelson in February 2022.

Mickelson told Shipnuck how he wanted to take part in the new LIV Golf Invitational Series because he wanted to use Saudi Arabia's interest in signing top stars for its own circuit to leverage the PGA Tour into giving the players more money.

Lefty said the comments he made to Shipnuck were "off the record", but Shipnuck completely disagrees with that.

As a result of the fallout from his controversial remarks where he labelled the Saudi regime as "scary motherf*****s", Mickelson decided to take time out of the sport to try to come back a better person.

Mickelson eventually took a four-month break before returning to competitive action and accepting a huge $200 million appearance fee to take part in the LIV Golf Invitational Series in London this week.

Despite claiming to have been refused media accreditation earlier in the week by LIV Golf for this week's event, Shipnuck took things into his own hands by travelling to St Albans and buying a ticket for himself to enter Centurion Club on Thursday.

Earlier in the day, Shipnuck tweeted how he had been told that Mickelson did not wish to speak to him.

I’m gonna live-tweet Phil’s round on the @firepitstories handle, starting in 20 minutes. Haven’t laid eyes on him since last year. (I just landed in London this morning.) I’ve been informed by tournament officials he doesn’t wish to speak to me; we’ll see how it goes post-round. https://t.co/Xcnx3xbxe5

Did that stop Shipnuck in his tracks?

Shipnuck tried to walk into the media centre to enter Mickelson's post-round press conference, but that did not go down well.

In Shipnuck's very words, he was "physically removed" by security who said they were "acting on orders from their boss."

Well, a couple of neckless security dudes just physically removed me from Phil Mickelson's press conference, saying they were acting on orders from their boss, whom they refused to name. (Greg Norman? MBS? Al Capone?) Never a dull moment up in here.

Shipnuck tweeted: "Well, a couple of neckless security dudes just physically removed me from Phil Mickelson's press conference, saying they were acting on orders from their boss, whom they refused to name. (Greg Norman? MBS? Al Capone?) Never a dull moment up in here."

Later on, Shipnuck then revealed on Twitter how he messaged LIV Golf CEO Greg Norman to inform him that he was removed by security.

Shipnuck texted: "Are you aware that I just got muscled out out of Phil's press conference by a couple of your goons? Luckily for you guys I kept my cool and deescalated the situation. Please call me to discuss."

Norman replied: "Did not hear. Thanks for letting me know."

Shipnuck then sent Norman a photo that he had been sent of the Great White Shark standing behind him outside the media centre.

You cannot make this shit up! I texted Greg Norman before someone sent me this video - I had no idea he was lurking behind me. pic.twitter.com/thgdMlfTAR

Mickelson found out after his first round of 1-under par that he has been suspended by the PGA Tour for having broken away to compete in the first LIV Golf tournament.

PGA Tour commissioner Jay Monahan revealed the news as soon as the shotgun went off to start the first round.

In total, 17 PGA Tour players who have committed to play in the LIV Golf Invitational London tournament will now face bans.

Mickelson and Dustin Johnson both lie four shots off the pace after round one.

Charl Schwartzel hit the front in the race for $4 million with a round of 5-under par.