Phil Mickelson issues an apology over his PGA Tour comments on social media, but golf writer Alan Shipnuck is not particularly happy about it. 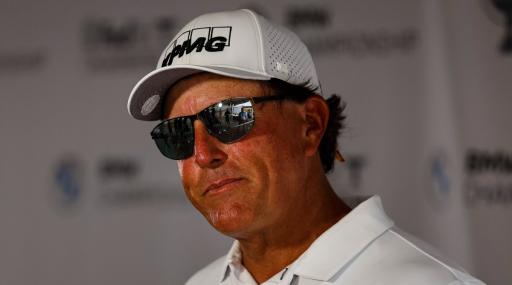 Golf writer Alan Shipnuck, who revealed an astonishing piece with Phil Mickelson about the PGA Tour and Saudi Golf League, has hit back on social media after reading Lefty's lengthy apology.

Mickelson, 51, sent shock waves through the golf world in comments he made to the biographer Shipnuck. Those comments were made back in November but only last week were made public.

Shipnuck is writing a biography about Mickelson that is due out in May.

In such remarks, it appeared Mickelson, who has been heavily linked with a move away from the PGA Tour to a new Saudi Golf League led by Greg Norman, claimed he had "a once in a lifetime opportunity to re-shape the PGA Tour".

Mickelson, the second highest career earner in PGA Tour history, also called the Saudis "scary motherf***ers" and suggested that their money had finally given him and the players leverage.

Lefty's comments drew derision from the golf world and his fellow players.

Rory McIlroy described him as "naive and ignorant".

After receiving a heavy backlash from a number of PGA Tour players, the media and golf fans around the world, Mickelson took to social media on Tuesday evening to issue an apology for his comments.

Mickelson seemed to take aim at Shipnuck in the opening of his apology, referring to "off record comments being shared out of context and without my consent."

But then he said "the bigger issue is that I used words I sincerely regret that do not reflect my true feelings or intentions."

Mickelson, who has now mutually agreed to separate with his sponsor KPMG, seemed extremely sincere in his apology.

"I used words I sincerely regret that do not reflect my true feelings," he says, before reflecting he needs "some time away" to spend with his loved ones as "work on being the man" he wants to be.

But after reading Mickelson's lengthy apology, Shipnuck took to his Twitter to address the "off record" comment.

"The 'off the record' piece of this is completely false and I'll have more to say on that shortly," tweeted Shipnuck.

Shipnuck has since written on the Fire Pit Collective, where he published Mickelson’s comments last week, that "not once did he say our conversation was off-the-record or on background or just between us or anything remotely like that. He simply opened a vein."

Mickelson's apology comes just 48 hours after Dustin Johnson and Bryson DeChambeau added their names to the growing list of PGA Tour players to rule themselves out of joining a new golf super league backed by Saudi billions.

Let's just say we might not have heard the end of this yet.