Ian Poulter feels "he has done nothing wrong" by playing in the LIV Golf Invitational Series and he will appeal the PGA Tour suspensions issued on Thursday. 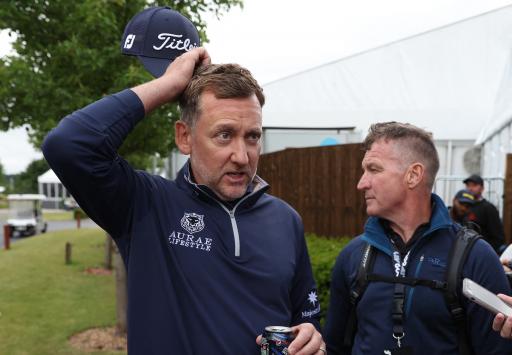 Ian Poulter will appeal his PGA Tour ban which was issued to him along with 16 other players for playing in the first event of the LIV Golf Invitational Series.

Poulter found out about Jay Monahan's letter after his first 18 holes, which was sent to the PGA Tour's membership minutes after the first tee shots were hit at Centurion Golf Club on Thursday afternoon.

The Englishman said he would consider a legal challenge to the tour and he maintained he hadn't done anything wrong for joining the breakaway series commissioned by Greg Norman.

Players from the PGA Tour and the DP World Tour weren't given releases to play in St. Albans, but Poulter asserted his innocence when he faced the press earlier this evening.

"I haven't resigned because I don't feel like I've done anything wrong. I've been all over the world for 25 years, played a lot of tournaments outside of continental Europe all in a calendar season," Poulter said after shooting 1-over-par in round one.

"This event is no different, it's the same. I've committed to play enough tournaments around the world as I have done for 25 years, so it's a shame that they've viewed this as something that is different.

"I will appeal for sure if that's exactly what it says (the PGA Tour letter), of course, I am going to appeal. It makes no sense how I have played the game of golf all this time.

"I am playing the game of golf that I love and they're going to take that opportunity away. It's disappointing.

"I believe I've been given permission in the past to play events around the world - It's disappointing - we'll sit down and evaluate the process and work it out. I don't feel I've done anything wrong."

Lee Westwood was shocked to hear that the PGA Tour had issued suspensions after his round too. Phil Mickelson once again declined to comment.

Next Page: "Feels dirty but I like it": Golf fans react to first LIV Golf Series broadcast