Richard Bland is the first player to officially confirm he will be teeing up in the first LIV Golf Series event at Centurion Club. 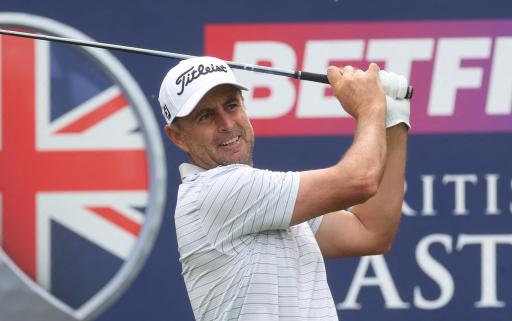 Richard Bland has told BBC Radio Solent that he will 100% be playing in the first Saudi-backed LIV Golf Invitational Series tournament at Centurion Club even if that means he gets banned from the DP World Tour.

Both the PGA Tour and DP World Tour have denied player releases for the first LIV Golf event in the second week of June, meaning golfers now run the risk of ending their careers on those circuits.

But with a total purse of $255 million on the line throughout the eight LIV Golf tournaments on the schedule this season, Bland, 49, believes now is the perfect time for him to make the move to Greg Norman's new Tour.

"Most of my career is behind me now as regards playing at the very highest level. I'm 50 years old in six months.

"I'm a realist. Mother nature does tend to catch up on you. I have an opportunity to play these events and secure my future and I'd be pretty foolish to turn that down."

Bland admits he always knew he was going to be denied a release from the DP World Tour to compete in the 54-hole event at Centurion Club in St Albans, England.

"I haven't been granted the release; I pretty much knew that a couple of weeks ago," said Bland, who won his first DP World Tour title of his career at the British Masters last year.

"Everybody has their own opinion and are they going to play or not going to play; you can only do what's best for yourself.

"I understand some people might not like that but it's an opportunity for me to make the next stage of my life very comfortable and how can I turn that down?"

Has Bland made the right decision? Will other players risk being banned from the DP World Tour and PGA Tour, especially if it will jeopardise their future Ryder Cup chances? Share your thoughts over on the GolfMagic social media channels, or come and join us on YouTube.