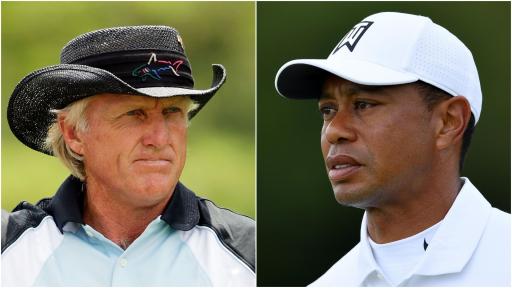 Golf fans have been reacting to news that Greg Norman has finally introduced his new Saudi Golf League to the world, and it's fair to say many believe it will prove a damp squib when it tees off this summer.

Okay, it's called the LIV Golf Invitational Series, but it's what we have been talking about for months now... a Saudi-backed golf league with hundreds of millions on the line.

Hope and anticipation for Norman and his backers that many of the leading PGA Tour names would sign up to the new golf super league were dented in recent months as one by one each of them committed their allegiance to the PGA Tour.

Rory McIlroy, Tiger Woods, Jon Rahm, Justin Thomas, Jordan Spieth, Dustin Johnson and even Bryson DeChambeau, to name just seven PGA Tour stars, have all confirmed they will stick by the PGA Tour despite the introduction of a new Saudi Golf League in 2022.

The first tournament in the Saudi Golf League will tee off this summer at Centurion Club in England, one week before the US Open.

A full list of entrants for the first event of the new super league has not yet been released, but it's fair to assume none of the world's top 20 will be involved, especially with its place in the schedule.

Norman has confirmed the door is still "wide open" for Phil Mickelson should he still wish to join, despite golf's oldest major champion taking an indefinite break from the sport following his controversial remarks surrounding the PGA Tour and Saudi Arabia.

While a total prize fund of $400 million across eight events may sound impressive, the lineups to these events may even do well to rival a Puerto Rico Open.

That is at least the feeling among our GolfMagic Readers over on our social media channels right now.

"This new super league will be as successful as Greg Norman's back nine at The Masters," said one golf fan, referring to Norman throwing away a six-shot lead to Nick Faldo at Augusta National in 1996.

Another commented: "The first tournament is the week before the US Open in England? Don't think many guys that qualified to play in the US Open would want to fly five time zones away and have to get back late Sunday night to prepare for our biggest championship."

"Greg Norman stands to make huge money, that's the only reason for a new league. It would be his!" said another golf fan.

"No big PGA Tour name will sign up to this, it's ridiculous," said another.

"I'd rather watch the Puerto Rico Open to be honest," joked one fan.

"Unless they get Tiger Woods then it has no chance of ever taking off," said one golf fan.

One golf fan wrote: "Beside the millions (that for some they already make), what will be the point to play in this league for the top players? It is not taken into account for the OWGR, Ryder Cup selection, FedEx Cup, Race to Dubai etc. There is no need to comment any further on this unborn thing."

"This will be known as 'The Has Been Tour'," joked another.

A minority of golf fans believe it could work, though. At least sometime soon.

"They will all say no until they see the 150th ranked guy in the world pick up $5 million," said one golf fan.

"I will be watching, I think it could be good. I'm all for change and the good of the game," said another.

"Nothing wrong with a bit of competition... wasn't there just the AFC before the NFC in the NFL?" commented one fan.

Out of the first seven events in the new Saudi Golf League, four of them will be held in America.

There will be $20 million in individual prize money available at each event as well as $5 million for the top three teams in this format.

After seven events have been completed, the top three players will share a prize fund of $30 million. The eighth and final event will have a team championship format with a massive purse of $50 million.

Although it has been branded as the LIV Golf Invitational Series, it is understood this is very much the entity of the Saudi Golf League which everyone had been expecting to arise this year.

The Trump National in New Jersey has been confirmed as one of the courses to be used on the new series. This is due to host the third event two weeks after The Open Championship.

Prior to the announcement, Norman sent a letter to the players on the PGA Tour, stating that they "will not stop" and they intend to continue their plans.

Next Page: Greg Norman feels sad for Phil Mickelson but believes he did make a mistake