Greg Norman on Phil Mickelson: "He made a mistake... I feel sad for Phil" 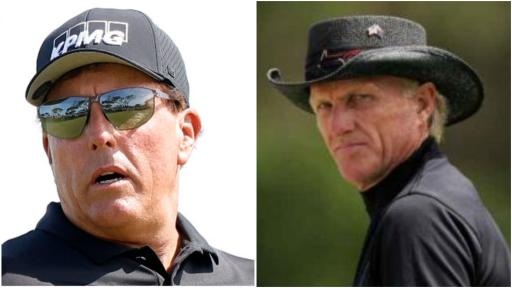 Greg Norman admits Phil Mickelson "made a mistake" in regards his comments surrounding both Saudi Arabia and the PGA Tour but how he also feels sorry for him.

Norman made his feelings be known on the GOLF Subpar podcast just days after a new Saudi Golf League was made official.

The new golf super league backed by Norman's LIV Golf Investments company and Saudi billions will tee up this summer with the first event at Centurion Club in England.

It is unknown as to whether Mickelson will compete in the Saudi Golf League moving forwards, or even the upcoming Masters, especially now Lefty has decided to take some time away from the game due to his controversial remarks made to golf biographer Alan Shipnuck.

Mickelson is wanting to take time out of the game in order to work on himself as a person.

Shipnuck released an excerpt of Mickelson's words surrounding the subject of the PGA Tour and Saudi Golf League four weeks ago following a conversation they shared back in November 2021.

After interviewing more than 200 subjects for his new book on Mickelson set for a May release, Shipnuck claims Mickelson told him that he didn't pretend to be excited about "hitching his fortunes to Saudi Arabia".

"I won’t comment on the comments," Norman said on the GOLF Subpar podcast.

"Some of it is more public when you’re a public figure, right? At the end of the day, as far as I’m concerned, as a player, I always want Phil to come back and play the game of golf.

"He’s promoted the game of golf extremely well. Not only for all the tours that he’s played on, but also for all the corporations that he’s been involved with.

"The fans are really behind Phil, and he did make a mistake, there’s no question about it. I will give Phil the time.

"I haven’t spoken to him since. I’m respecting his wishes about stepping away and having the opportunity to regroup himself.

"But I’ve had numerous conversations with Phil before that about how passionate he was about LIV Golf and the opportunities that he could have.

"I feel sad for Phil. I feel for Phil. But like I said, he’s always going to have an open door to the game of golf as far as I’m concerned."

Next Page: Greg Norman says door is "wide open" for Phil Mickelson when he returns to golf