Alan Shipnuck has "some incredibly damaging information" about Phil Mickelson

Golf biographer Alan Shipnuck reveals he is in "possession of some incredibly damaging information about Phil Mickelson" but that it's not going into his new book. 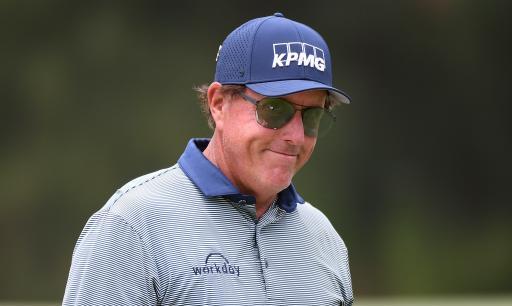 While the dust continues to settle after Phil Mickelson's shocking remarks about the PGA Tour and a new Saudi Golf League were made public, golf biographer Alan Shipnuck has revealed he is in "possession of some incredibly damaging information" about golf's oldest major champion.

Shipnuck released an excerpt of Mickelson's words surrounding the subject of the PGA Tour and Saudi Golf League two weeks ago following a conversation they shared back in November.

After interviewing more than 200 subjects for his new book on Mickelson set for a May release, Shipnuck claims Lefty told him that he didn't pretend to be excited about "hitching his fortunes to Saudi Arabia".

Mickelson believed his comments to Shipnuck had been made off record, while Shipnuck said they were on record.

His comments quickly drew derision from the golf world and his fellow players, with Rory McIlroy describing him as "naive and ignorant".

As a result of his controversial comments, Mickelson has now lost a number of sponsorship deals including KPMG, Workday, Heineken / Amstel, and Callaway has decided to pause its partnership for the time being while the American takes some time out of the sport.

Related: Here's what Mickelson said to Shipnuck when the shocking excerpt was made public

In answering some of his latest #AskAlan questions about Mickelson over on the Fire Pit Collective, it would appear the biographer is holding back yet more "damaging information" about him when it comes to his new book.

Shipnuck was asked by one of his followers: "On a scale of 1-10, how much more explosive info is in the book?"

8.5? There’s a lot in there, but I don’t want to give the impression that this is just an exposé. I have always enjoyed covering Mickelson, and this book was written with a lot of affection.

There are so many funny and ridiculous and outrageous stories about the guy. I celebrate his large-scale philanthropy and random acts of kindness and generous mentorship toward young players.

I bring to life his most thrilling victories. But he has been involved in a lot of messiness, too, and it’s all in there. That’s why I think it is a balanced and fair look at a very complex person.

For the smattering of Twitter trolls who have accused me of trying to “ruin” Mickelson, I will just say that I am in possession of some incredibly damaging information about Phil that I have elected not to put in the book because it is highly personal and would cause pain to too many people.

It would have been by far the most explosive material in the manuscript. Saudi Arabia, insider trading, Billy Walters, the bust-up with Bones, throwing Tom Watson under a Greyhound, gambling debts, the cold war with the USGA…all of this has played out in public.

I’ve just dug deeper and gotten the real story behind it all. But some things are intensely personal, and I’ve respected that.

Next Page: Tiger Woods betting odds to win The Masters are now available - and Max Homa cannot quite believe it