In Gee Chun came out on top on a dramatic final day at Congressional to finish one shot clear of Minjee Lee and Lexi Thompson. 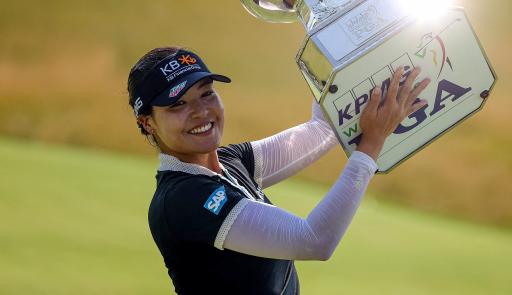 In Gee Chun secured the third major title of her career by winning the KPMG Women's PGA Championship at Congressional by a solitary stroke.

Chun began the final round with the lead but this was soon gone as Lexi Thompson made an early move with two birdies in her first three holes.

By the turn, Thompson led the way by two shots on 6-under-par. She added another birdie on the 11th hole in Maryland to maintain a two-stroke advantage with seven holes left.

But as we saw at the Women's US Open in 2021, Thompson unravelled with a series of visibly nervous and apprehensive shots. But she still led by two shots with three holes left.

Chun didn't go away despite making four bogeys on the front nine. As Thompson agonisingly bogeyed the 16th and 17th holes, Chun regained the lead with one hole left and rolled in a par putt on the 72nd hole to claim victory.

Despite weekend rounds of 75, the South Korean claimed her fourth win on the LPGA Tour, three of which are major championships. Thompson finished tied second with US Women's Open winner Minjee Lee.

"I made it. First nine holes I got a lot of pressure, so to be honest, I couldn't enjoy playing golf," Chun said after her win.

"I believe if I stick to my game plan and then I believe I have a chance in the back nine, so I try to hang in there. I'm so happy I made it. My body is still shaking, though.

"So I want to tell truth. So I think I couldn't control all my pressure. This is why I had four bogeys.

"Then at the same time, you know, the course is never easy here. Congressional Country Club is a hard golf course, and we have tough pin positions.

"I just want to say sometimes my golf is not perfect, so it just happens from the front nine."

Next Page: Report: Matt Wolff expected to be announced as next LIV Golf player