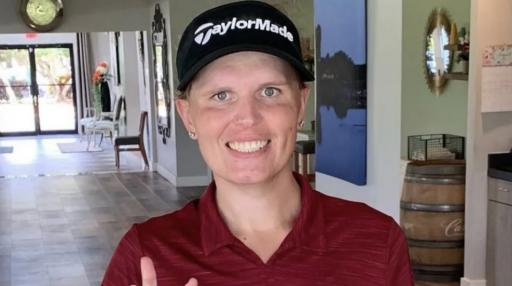 Davidson, 29, is on the brink of gaining 2023 Epson Tour status. If she gets there, she will be competing for her LPGA Tour card.

She made history in 2021 when she became the first trans woman to win a professional tournament in the United States.

Appearing on the Like It Is podcast in July, she explained the transphobia that she has encountered in her life.

"I've seen that it's not about protecting women's sports or me having an advantage, it's just that you don't like trans people," she told the podcast.

"It's very sad that that's what it comes down to. In the last couple of months, that's what I've come to learn."

Davidson is reportedly only the second trans woman to ever make it to the first stage of the LPGA Qualifying school.

She previously spoke to Golfweek about accusations she has an advantage, telling the publication: "I guess that's what frustrates me the most.

"If I play bad, then people will feel justified – 'Oh well, she played bad and wasn't good enough.' – If I do anything good, it won't be because of the fact that I put my whole life into this … it would be because I'm trans."

The top 100 players of the qualifying rounds will move to the second stage of qualifying in October, with the final stage in December.

Davidson tied for 59th place after the first two rounds of the LPGA and Epson Tour Qualifying School in Palm Desert last week.

The LPGA Tour has welcomed trans golfers for more than a decade.