One of Jessica Korda's luggage bags got lost in transit on its way to Edinburgh for the AIG Women's Open, forcing the American to borrow clothes throughout the week at Muirfield. 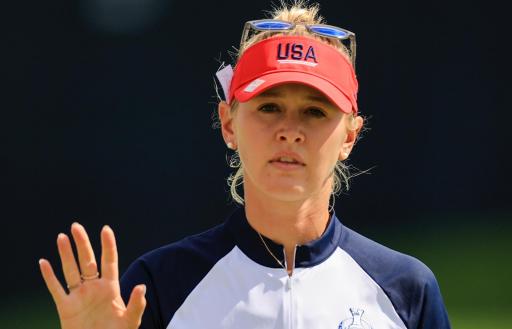 There seems to be travel horror every week in the golf world and Jessica Korda has fallen victim to this during the AIG Women's Open.

On Thursday, Korda had to wear clothes that FootJoy sent her and a hat from Muirfield, the host venue, as her duffel bag was still at Zurich airport according to a tracking app.

"So if anyone knows anyone at the Zurich airport that would like to put my suitcase on the one flight a day that they have coming into Edinburgh. I'd deeply appreciate it."

Despite her travel trouble, Korda put this behind her to shoot an impressive 66 to sit one shot adrift of Hinako Shibuno after the first 18 holes of the final major of the year.

Korda, 29, made four birdies and an eagle on the par-5 17th hole to reach 5-under-par. Korda came closest to winning her first major title earlier this season when coming second at the ANA Inspiration.

Shibuno, who won the Women's Open in 2019, made eight birdies and two bogeys on her way to a round of 65. The "Smiling Cinderella" won her maiden major title at Woburn three years ago.

"It has been a long time since I've played this well, especially putting. Honestly it was a little frightening. I was thinking about it (the leaderboard) from time to time. It was nostalgic to be on the top," said Shibuno.

"Two years ago, when we were playing at Royal Troon, the wind completely overtook my shots. I wasn't thinking about how to use this to my advantage. However, in this tournament I could adapt my style to the elements."

Shibuno is one shot ahead of of Korda and two shots ahead of Scottish home favourite Louise Duncan and Mexican Gaby Lopez.