Gary Player on his son's Masters controversy: "Man's got to take his punishment" 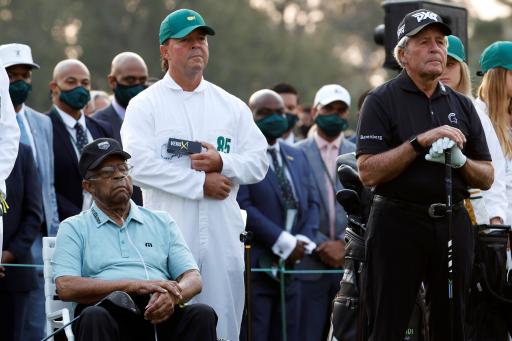 Gary Player has finally had his say on the controversial Masters moment involving his son Wayne Player in an interview with Ann Liguori of WFAN.

Player, 85, was speaking just two weeks removed from his son Wayne Player, 58, caught advertising a sleeve of golf balls while Augusta National chairman Fred Ridley was giving his speech about Lee Elder, the first black golfer to play in The Masters back in 1975.

As a result of his actions, it is believed Wayne will now be banned from Augusta National and The Masters - although nine-time major champion Player has not confirmed that just yet.

Player made it clear in his interview with WFAN that Wayne is a "dear friend" of Elder, but that he deserves to be punished should Augusta National consider that the right thing to do.

Player added: "I don’t think he did it with any malice. He was basically telling his friends, ‘My father will play this ball.’ And I think his friends didn’t believe it because it’s not a ball on the market.

"It was wrong, and I said to Augusta, ‘Listen, a man’s got to take his punishment. If he does something wrong and you don’t want him back here again, then just bar him. That’s what you go to do.’"