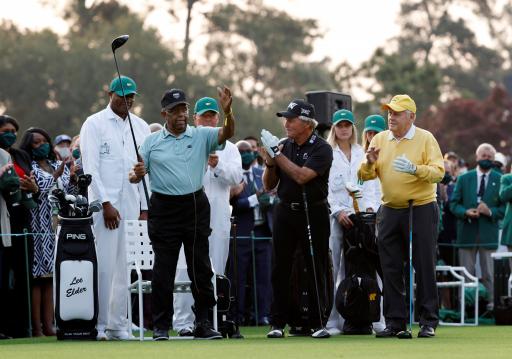 Gary Player's son has been banned from Augusta National Golf Club as a result of his shocking golf ball stunt during the traditional honorary starter's ceremony at The Masters on Thursday.

Wayne Player, 58, was caught advertising a sleeve of golf balls while Augusta National chairman Fred Ridley was giving his speech about Lee Elder, the first black golfer to play in The Masters back in 1975.

Unfortunately Elder was unable to hit a shot off the 1st tee due to health reasons, but it was still an incredibly special moment to witness.

It was just a shame it was ruined somewhat by Wayne Player's disrespectful stunt where he held up a sleeve of OnCore golf balls.

Lee Elder is joined this morning by special guests including his family, representatives from Paine College and a group of Black PGA professionals. #themasters pic.twitter.com/C9AJSlypF4

As a result of his actions, Wayne Player has now been banned from Augusta National and The Masters, according to his brother Marc.

"Wayne has since correctly been banned from Augusta National and The Masters tournament," tweeted Marc Player.

"What a shame. What an embarrassment. What a bad decision to allow him on the first tee after years of similar shenanigans. My apologies to all."

Can't think of a tournament in recent history that's had a more contrasting beginning and end. pic.twitter.com/mED73R1tSN

Wayne Player was arrested in 2019 over fraud charges from a rental agreement he made for housing during the 2018 Masters.

PGA Tour
EA Sports set to make comeback with PGA Tour game featuring all four majors
The Masters
Tom Watson joins Nicklaus and Player at The Masters as honorary starter
The Masters
Bryson DeChambeau DELIGHTED to receive official Masters invitation
The Masters
The Masters: Reigning champion Hideki Matsuyama to receive his official invite
The Masters
See who snuck inside the world's top 50 to earn their spots at the 2022 Masters