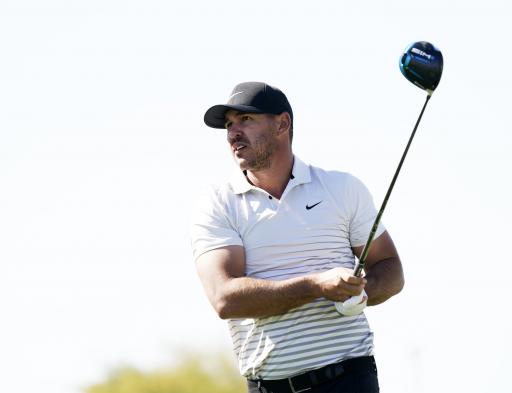 Golf fans have praised Brooks Koepka for his hilarious tweet on Monday where he reacted to the rumour that his recent knee surgery would have him out of action for six to eight months.

The four-time major winner announced he was feeling fully healthy for the first time in years at the start of 2021 and it didn't take long for Koepka to get back in the winner's circle with a victory at the Waste Management Phoenix Open.

Unfortunately for Koepka, more injury concerns were to follow when he damaged his right knee and although he underwent successful surgery, there were rumours flying around the PGA Tour that Koepka would be out for a seriously long time.

Rory McIlroy's putting coach Brad Faxon made an appearance on SiriusXM PGA Tour Radio where he added fuel to the fire by saying he had heard Koepka was out for six to eight months and had no chance of making it to The Masters.

"There was rumours around here, the Honda Classic last week where I live, I was on the range with caddies and talking and I have instructor friends, I think this injury is way more serious than Koepka's letting on.

"I've heard rumours he's out for six to eight months. So I don't think The Masters has a chance."

Koepka only recently announced that he would be participating at The Masters and he took to Twitter to react to the widespread rumour about his recovery time, by using an image of Michael Jordan from the hit documentary The Last Dance, where the basketball icon said the phrase "I took that personally" on multiple occasions.

Golf fans absolutely loved Koepka's tweet, so take a look at some of the reactions below.

/Sees Bryson on the range pic.twitter.com/sj9IxuSggA

We don’t deserve you pic.twitter.com/Om2uEbMKZD

on Brooks for killing it at Augusta

NEXT PAGE: Bryson DeChambeau RIPS DRIVER BOMBS one after another on Masters range!