Did you see Bryson DeChambeau do this at The Masters on Sunday? 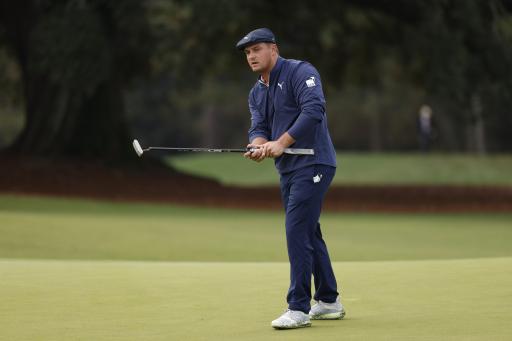 Golf fans have grilled Bryson DeChambeau for throwing a slight tantrum during the final round of The Masters, where he pulls the flag out of a hole and gives it to his caddie with some attitude.

Don't get me wrong, we at GolfMagic think DeChambeau has serious talent and his potential is off the charts. There's no doubt he's going to go on to win many more tournaments, but once again his attitude is what has people talking following The Masters.

The reigning US Open champion was paired with two-time Masters winner Bernhad Langer for the final round of this year's action at Augusta, where DeChambeau shot 1-over par to finish the tournament in T34, with a final score of 2-under par.

DeChambeau said after his round that he was suffering throughout the tournament with "dizziness" and at times he couldn't see a thing, making it difficult to read the greens and make putts.

RELATED: Bryson DeChambeau reveals he felt "DIZZY" throughout The Masters

Following the final round on Sunday, a video went viral of DeChambeau missing a putt on the par-4 7th hole, which he went on to tap in for bogey.

DeChambeau missed the par-putt and grabbed the flag, pulled it out of the hole and swung it round to give to his caddie without any eye contact, in what seemed to be a bit of a strop.

WATCH THE INCIDENT IN THE VIDEO BELOW:

"It’s like when Happy Gilmore’s caddy caught the club he threw," said one golf fan in the comments.

"I can’t even imagine what his full potential is on a mental breakdown. Man would be Wreck it Ralph," joked another.

"He’s young..... his mind will catch up with his body one day. Kid is a gamer, just needs to learn to let his game do the loud speaking on his behalf and have a bit more humility. Life... we are all just trying to figure it out," said one fan, defending DeChambeau, as he believes the 27-year-old's attitude will improve with age.

"Disrespectful to Bernhard, he could learn some from this legend."