Hideki Matsuyama won his first major championship at The Masters on Sunday, becoming the first Asian-born player to earn a green jacket. 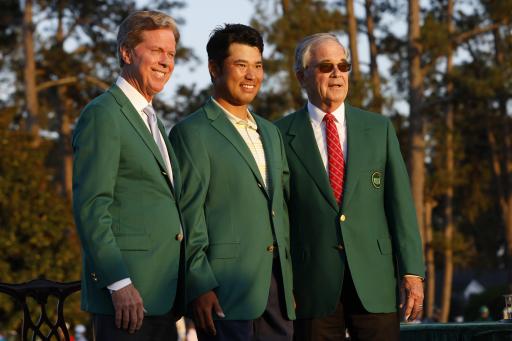 Hideki Matsuyama created history at Augusta National as he became the first Asian-born player to win The Masters and the first male Japanese player to win a major championship.

The green jacket is one of the most sought-after items in golf, along with the Claret Jug and the Ryder Cup, and it is fair to say that Matsuyama cherishes his new piece of hallowed clothing.

The Japanese superstar was spotted at Atlanta Airport, sat down with his green jacket taking pride of place and separated from his luggage bags on the back of a seat.

Matsuyama was clearly very proud of his victory and so he should be, which is what many golf fans thought as well.

"Absolutely love this. What a beaut," one fan said.

"This is wonderful... speaks volumes," another fan said.

Matsuyama began the final round of the Masters with a four-shot lead and although he bogeyed the first hole, he retained a four-stroke advantage after nine holes.

As Matsuyama led, Xander Schauffele and Justin Rose both played the front nine over par and it was looking like a formality for Matsuyama, who was looking for his first win since 2017.

Schauffele fought back with four consecutive birdies on the back nine, but a triple-bogey on the par-3 16th hole ended his chances.

Matsuyama climbed to number 14 in the Official Golf World Rankings and hopes to become a pioneer for Japanese golf.

NEXT PAGE: THE MASTERS 2021: GOLF FANS REACT TO THE FIRST MAJOR OF THE YEAR

The Masters
PGA tour
hideki matsuyama
xander schauffele
Justin rose
Previous
The Masters 2021: Golf fans react to the first major of the year
Next
Which Shot Scope Product Is Right For You? | GOLF GPS WATCH VS RANGEFINDER