Ian Poulter asks golf fan to unfollow him after not getting his sense of humour over Masters post. 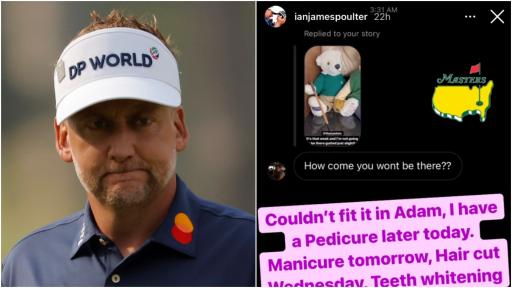 Ian Poulter will miss his first Masters in five years this week, and he has hit back at a golf fan who called him a "d***" on Instagram ahead of golf 's first major of the year.

Poulter, who has finished in the top 10 at The Masters three times in his career, missed out on a place in the field at Augusta National as a result of finishing outside the world's top 50 down in 70th position.

The Englishman posted his frustration at not being at The Masters this week via his Instagram Story.

Poulter posted: "It's that week and I'm not going to be there, gutted just slightly."

One of his followers then sent him a DM saying: "How come you won't be there?"

Poulter responded via his Instagram Story so that all his followers could see his reply.

"I should give everyone else a chance really."

Another one of his followers then responded to that post with: "No need to be a d*** he was genuinely asking."

Poulter then hit back to that particular reply once again on his Story.

"Really sorry Braeden if this level of sense of humour isn't to your liking, just click the unfollow button then you won't need to call anyone a d***."

Next Page: How to live stream The Masters for free this week