Cameron Smith discusses his game ahead of The Masters, his favourite beer and why his mother is finally liking his hairstyle. 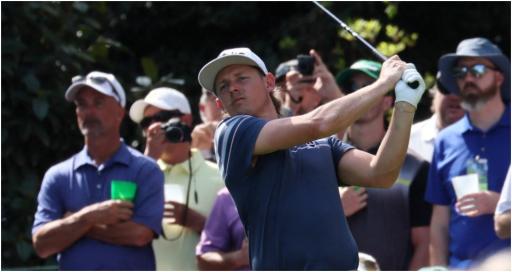 Cameron Smith says he feels "hungry" for major success as he heads into The Masters as he admitted even his mother is starting to like his hairstyle.

Smith became the champion of champions earlier in the PGA Tour season with a record-low score in Hawaii and followed that up with an incredible peformance at TPC Sawgrass that belied his years when he captured The Players.

Now he has a chance to topple Scottie Scheffler atop the OWGR if he were to win at Augusta National this week.

Smith said: "Yeah, I feel pretty hungry, mate. Pretty good time of year to be playing good golf. You know, it's just nice to contend. Still been working hard the last couple of weeks at home, and, yeah, I really can't wait to get back out here this week.

"I've had three weeks off after The Players. Yeah, just ready to compete. I feel like my game hasn't done too much over the last few weeks. Just hitting a few balls here and there and focusing on the short game for around here."

Smith hadn't seen his family for the better part of two years due to the pandemic. It's part of the reason why he took some time off after The Players.

He said of catching up with loved ones: "It was unreal. It was just nice to see a familiar face(s) again. I still haven't been able to get back to Australia yet. I'm really looking forward to that trip.

"But to see Mum and Mel [Smith's sister] was unreal. We spent a lot of good quality time before and after the tournament. And, yeah, can't wait to get back to Australia and see the rest of the family."

What did mum make of his current hairstyle?

"I think she's coming around to it, slightly," he joked.

How does Smith prepare in terms of his mindset after having such incredible success this season?

Smith said: "Yeah, I think it's just -- you know, it's just reassuring. Playing good golf, sometimes you can go it seems like forever playing really good golf, and you don't even sniff a tournament.

"So it's good to get a couple of wins under the belt. I'm looking forward to still competing.

"It's just confidence. I feel really confident in my game. I feel like I can play any shot under any circumstance, and yeah, I'm ready to go out there."

Smith admitted to the media when he first played The Masters he was so concerned with making the weekened he felt hesitant with his putter.

Now he isn't so afraid of making those nasty little three and four footers back up the hill. He wants to be aggressive with his approach shots.

Smith said: "I think the first -- the first year, I was just so worried about making the weekend, and I was able to make the weekend and just free up.

"I felt like I was able to hit those shots I was talking -- hit the right shots, and they are very demanding around here.

"But that's when I think it turned around for me, was that weekend where I just felt at ease and was able to free up a little bit."

A few years ago Smith admitted that he felt like he was fixated on working out but it led to him feeling dreadful on the golf course.

Now he has a much better work/life balance.

He plays golf in the mornings, goes to the gym, then in the afternoon he goes fishing with the boys or mows his lawn.

His favouite drinks are XXXX Gold or Longboard Lager.

He said: "I wouldn't say I drink a whole lot. I definitely love a beer with the boys on the weekend or something like that, but during the week I keep it pretty tidy.

Smith added: "I would like to work harder, but I feel like I have a very good, you know, kind of work/life balance.

"I feel like I'm able to get out in the morning, do my work, do some gym and then go fishing or do something else in the afternoon, mow the lawn. "

Smith has made the cut in all five of his Masters appearances, including two top 10s and a runner-up finish in 2020. That year, the Australian made Masters history, becoming the first player to shoot in the 60s in all four rounds.

Smith, 28, is a two-time Australian PGA champion and has won five times on the PGA Tour.

His scoring average around Augusta National is 71.5.