Bryson DeChambeau discussed injuries, the future, his fitness and Phil Mickelson ahead of The Masters. 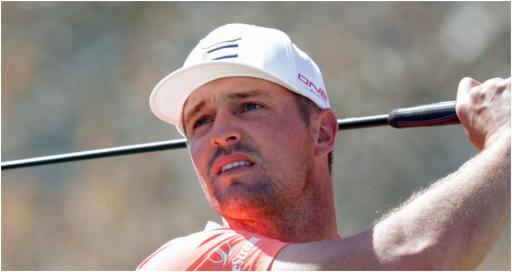 Injured Bryson DeChambeau says Phil Mickelson has "gone dark" and is not responding to phone calls as he revealed he is defying doctors' orders to play The Masters.

Mickelson, 51, is missing The Masters for the first time in 28 years after making controversial remarks about the PGA Tour and how it operates and is now laying low. There is no word about a potential return date.

DeChambeau faced the media ahead of the first major of the year where he admitted he was approximately 80 per cent full fitness.

Interestingly, he admitted doctors told him not to play but this major only comes round once a year so he felt like he had to give it a go.

The 28-year-old told the media his left hip labrum is still bothering him slightly after he tore it around two years ago when he started speed training.

He aggravated that injury, he said, when he was speed training on concrete and slipped but "didn't talk about it too much" because he felt fine.

On top of that, he sustained a hairline fracture in the hamate bone in his wrist.

When he played at Torrey Pines earlier in the season he said he "felt like something popped". "I was like, ah, that's not normal," he said.

Then when he went to the Saudi International he was playing ping pong and slipped on some marble floors.

Incidentally, he was playing Sergio Garcia and Joaquin Niemann at the time, he said.

He said: "And me not paying attention, I Charlie Brown'd myself and went horizontal and then hit my left hip and my hand at the same time, and that really just took me out."

DeChambeau added: "That's really when it just got to the point where I couldn't even grip the golf club.

"I tried to play that week, and it was impossible. I was not even gripping with my left hand that week. I was like, this is dumb, I have to go take care of my body first and get it right.

"That's what happened. And went and got a CT scan, MRI, and we found out that -- and X-rays in my left hip, was kind of -- I had a torn labrum, a partial tear.

"And then in the hand I had a hairline fracture in the hamate bone, which a lot of baseball players get from excessive hitting. That's kind of how it all happened."

DeChambeau also said in his press conference that taking the time away made him realize that golf wasn't everything in life.

"I've had a lot of things change behind the scenes, which has been awesome for me," he said.

" [It has] allowed me to do some pretty cool things on YouTube and hopefully create an audience that can see what's going on in my life and see what I want to do for -- just give back to the game of golf as much as I can and get back to the younger generation.

"It's just a great opportunity to showcase what I want to do to give back and hopefully help grow the game a little bit.

"I don't want to say I can grow the game, but I want to give back as much as possible in that area.

DeChambeau appeared in a video alongside YouTube content creators Dude Perfect in an All Sports battle at Augusta National.

Was DeChambeau surprised Augusta allowed that kind of video to be filmed?

DeChambeau said: "Everybody was. And I think that's a pretty cool attribute of what Augusta is doing now, and I see it changing in a very cool way for a younger audience, new generation.

"I love that it's starting to move towards the younger generation, which is amazing, and that's what I'm all about."

DeChambeau feels as though event at 80 per cent he still has a chance of winning The Masters.

"I know I've talked to Tiger about all that matters is that back nine. You have to get yourself to that back nine, close to the lead," he said.

"That's all that matters. I haven't really done that recently. I have to work on getting back there with all facets of my game better than where they have been."

When asked if the doctors recommended him not to play for a bit longer, he said: "They recommended that I don't come back for a while.

"They said if you go out and hit golf balls and you feel somewhat comfortable, you consider it, and they are like, you should really let it heal.

"And even Chris [Como, his coach] has told me, you probably shouldn't play, even though he wants me to play obviously, right.

"But he's really looking out for my best interests for the future. I'm like, man, this only comes around once a year, and I've got to give this a go.

When asked about Mickelson, DeChambeau said: "I've tried to reach out, but he's gone dark. There's no contact."