The former World No.1 finished in a tie for third after another impressive tournament. 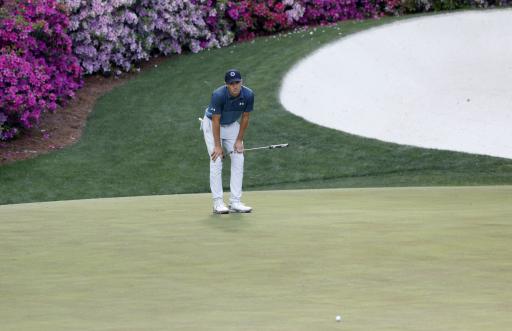 Jordan Spieth took the positives out of another impressive performance as he finished in a tie for third at The Masters, but admitted he felt some "mental fatigue" over the final two days.

After winning the Valero Texas Open last week, many believed Spieth would make it two wins in a row with a victory at The Masters and although the former World No.1 started well, he was unable to apply much pressure at the weekend.

Spieth shot a 2-under par final round at Augusta National, but it wasn't enough to close the gap on Hideki Matsuyama who went on to win his first major title.

Had Spieth started with a little more tenacity on Sunday, he may have been in contention coming down the stretch, but the American played the first nine holes 1-over par and left himself with too much to do after making the turn.

"I just needed a really good start to have a chance today," Spieth said after his final round on Sunday. "I just didn't have a great start. Then it was just kind of the story of the week.

"I hit some good putts, burned a lot of lips, certainly struck the ball well enough to win the golf tournament, and they just didn't go in.

"I'm tired. I felt some mental fatigue for sure and made a couple of bonehead mistakes over the weekend, just from, I think, maybe the long stretch. But all in all, certainly another good finish here."

Spieth has made serious improvements over the past few months, having gone from almost slipping outside the top 100, to now sit in 29th as he looks to get back to his very best.

His form is certainly heading in the right direction, but Spieth believes there is still some work to do before we seee the 27-year-old playing the way he did during his dominant years on the PGA Tour.

"I wish that I had the control of my swing that I hope is coming or I think is coming soon because it would have made things a little easier this week, and I did strike the ball really well.

"I hit a lot of fairways," he added. "I put myself in position to hit a lot of greens, and distance control is a strength of mine with iron play, and I did a good job of that.

"So all in all, I've made a lot of good progress, but I feel like that road ahead is still significant for me. So I've got at least a couple weeks off right now where I'll rest for a while and then regroup - off weeks are where you can make maybe five per cent differences. Tournament to tournament, it's hard to go more than a couple per cent and trust what you're doing.

"I'll have a good stretch coming up here in May and June, and I'm excited for what's to come."