Justin Rose started his second round poorly at Augusta National but fought back to shoot a level-par 72. 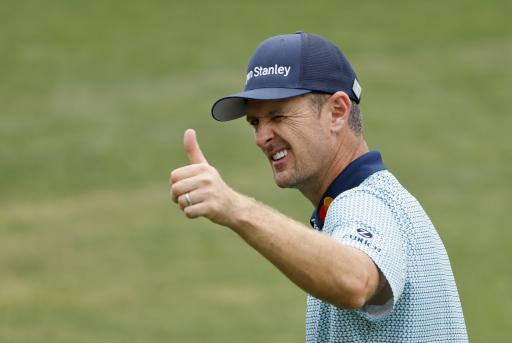 Justin Rose leads The Masters at the halfway point on 7-under-par, one shot ahead of Will Zalatoris and Brian Harman.

Rose, 40, hit his first tee shot in the trees and it would lead to the first of four bogeys on his opening nine.

But much like his first round, Rose made a superb comeback on the back nine with birdies at the 13th, 14th and 16th to pull his score back to 7-under-par for the tournament, which was enough to maintain his lead - albeit trimmed from four down to one.

Jordan Spieth, the 2015 Masters champion, made a significant move up the leaderboard into tied fourth on 5-under-par with a solid round of 68.

The 27-year-old made five birdies on Friday with his only bogey coming at the par-3 12th hole when failing to get up and down from the front bunker.

Spieth was fancied by many to go close at Augusta National this week after he won his first PGA Tour title for nearly four years at the Valero Texas Open last weekend.

Zalatoris and Harman shot 68 and 69 respectively to move to 6-under-par as they both go in search of their maiden major titles. The former is making his Masters debut and was a late entry into the tournament after moving into the world's top 50.

Bryson DeChambeau shot a disappointing score of 76 in the first round but the big-hitting American bounced back in the second round with a 5-under-par 67.

DeChambeau made four birdies on his last six holes to surge up the leaderboard into tied 17th on 1-under-par.

Si Woo Kim shot a 3-under 69 on Friday to rise to 4-under for the tournament, but the South Korean was forced to play his last three holes without a putter after he snapped it on the 15th green.

NEXT PAGE: SI WOO KIM SNAPS HIS PUTTER ON DAY TWO AT THE MASTERS!