Si Woo Kim SNAPS HIS PUTTER on day two at The Masters!

Si Woo Kim was enjoying a good second round at The Masters until the 14th hole where the young South Korean lost his cool. 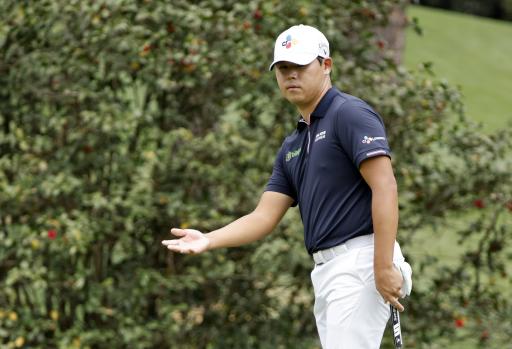 Si Woo Kim snapped his putter and swore on the live broadcast during the second round of The Masters at Augusta National.

Kim was 4-under-par for his round when he reached the 14th hole but his approach to the par-4 went long and his frustration led to the South Korean firing an expletive through the Georgia air.

The commentary team at Sky Sports were forced to apologise for Kim's behaviour shortly before he went on to take three putts from the edge for a bogey-five.

Kim's frustration didn't end there. On the 15th green, Kim slammed his putter into the ground on the edge of the green and bent the shaft of the club in the process.

Thankfully he only had three holes left to play, and to his credit he went on to make three pars to the house to card a 69 and lie in contention for his maiden major title on 4-under par, which is three shots behind Justin Rose.

Following a three-putt on No. 14, Si Woo Kim breaks his putter.

Butch Harmon, the former coach of Tiger Woods who is co-commentating for Sky Sports Golf this week, was not surprised in the slightest to see Kim showing his frustration so openly.

"He's been known to snap some clubs," said Harmon. "I believe he snapped three of them last week."

It wasn't just Harmon who commented on Kim's antics at The Masters, golf fans across social media were quick to react to the South Korean snapping his club.

Si Woo Kim snapped his putter halfway through the round and now has to putt with his hybrid. #TheMasters pic.twitter.com/IXQK37KAJS

Si Woo Kim after breaking every club in his bag #themasters pic.twitter.com/8cEI2Jk9G7

Before he lost his cool, Kim was soundly following up on his first round of 71. He made birdies on the 3rd, 6th and 8th holes and he also found another birdie at the par-5 13th hole, shortly before he swore live on television.

Kim is making only his fifth appearance at The Masters with his best result coming in 2019 when he finished in 21st place.